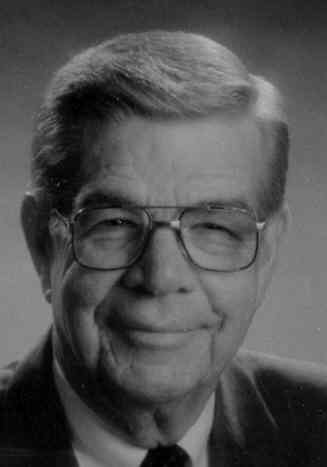 Dr. Neil Brahe D.D.S.
Age 76
Of Appleton, passed into eternal life on May 19, 2003 following a brief, yet valiant battle with lung cancer. Neil was born June 21, 1926 in Appleton to Ralph Brahe and Mary Jesse O‚ÄôBrien Brahe. He graduated from Oshkosh High School and served in the U.S. Navy during WWII. Neil attended UW Oshkosh and Ripon Colleges and received his Doctor of Dental Science Degree in 1952 from Loyola University in Chicago, IL. The family returned to Appleton where Neil practiced General Dentistry for 33 years.

For over 30 years, Neil served as President and CEO of Project D Marketing Resources for which he created educational materials and authored seven books for the dental profession. During this time, he also instructed at Marquette University School of Dentistry. He was also one of the original three founders of Doctors Park in Appleton. He was an avid private pilot and was part owner of Balloons Aloft Inc., a hot air balloon advertising venture. Neil was actively involved in B.P.O.E. (Elks) and Rotary. He served as the first Chairman of the Appleton Flag Day parade.

In 1981, Neil renovated a large, Victorian home in Oshkosh, for his dental office. This venture led to the creation of the Tiffany Inn Bed and Breakfast, which paved the way for the Christine Ann Domestic Abuse Center.

He is survived by his children: Alison (William) Kaegi, David (Susan) Brahe, and Bruce (Judy) Brahe, and their mother, Grace Savage. He is further survived by his seven grandchildren of whom he was extremely proud: Sarah and Christopher Nigl, Michael, Gregory, Joseph and Christina Brahe, all of Appleton and Brandy Brahe, Florida. Other survivors include two brothers: Tom (Jean) Brahe and James Brahe both of Florida.
He was preceded in death by his parents; brother, Bruce Brahe; son-in-law, Stephen Nigl; parents-in-law, Carl and Asta Jensen.
Funeral Services will be held on Friday, May 23, 2003 at 11:00 AM at the funeral home with Deacon Pete Reinl officiating. Visitation will be on Thursday, May 22 from 4:00 until 8:00 PM at the funeral home, and again one hour prior to the service on Friday.
A memorial fund is being established.
Neil will be remembered as a thoughtful, caring and generous man who touched many lives. He was an extremely positive and optimistic man. He will be missed by all who knew and loved him.

To Laugh Often and Much‚Ä¶
To laugh often and much; to win the respect of
intelligent people and the affection of children; to earn
the appreciation of honest critics and endure the betrayal
of false friends; to appreciate beauty; to find the best in others; to leave the world a bit better whether by a
healthy child, a garden patch, or a redeemed social
condition; to know even one life has breathed easier
because you lived. This is to have succeeded.
Ralph Waldo Emerson