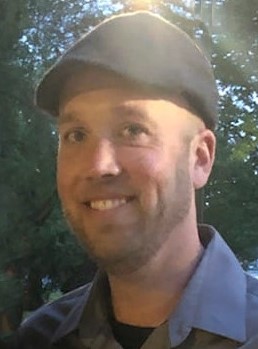 In the morning hours of March 27th, 2021, Nathan “Nate” Daniel Koskelin of Kaukauna, loving father of two children, passed away at age 42 as a result of a sudden and unexpected medical event.  A private viewing for immediate family was held on Thursday, April 1st.  A public memorial service complete with military honors is tentatively planned for August.

Nate was born to David Koskelin and Ellen Condon Koskelin on June 20th, 1978 in Wausau, Wisconsin.  He graduated from Little Chute High School in 1996 and went on to serve in the Wisconsin Army National Guard in the 32nd Infantry (Red Arrow) Brigade Combat Team, Gator Battalion 2-127th Infantry with Bravo Company (Black Sheep) and was deployed to the Middle East during Operation Iraqi Freedom during 2005-2006.  Nate was employed at Shapes Unlimited of Little Chute for the past eight years.

Nate had many friends and loved ones.  He was a talented and frequent participant in karaoke nights at local establishments near his home in Kaukauna.  He also treasured time with his innumerable friends around an evening campfire in his backyard. His time during his deployment with others in the Wisconsin Army National Guard shaped him and created lifelong bonds that were very important to him, and some fellow soldiers named him “Mr. Sunshine” because of his ability to lighten the mood and lift spirits in any situation.  Above all, he was a father to Sebastian (13) and Aubry (12) who were his whole world and for whom his love had no bounds.

In lieu of flowers, the family requests contributions to a GoFundMe which will be used to create a secure financial trust for his children: https://www.gofundme.com/f/77zknh-nates-memorial-fund