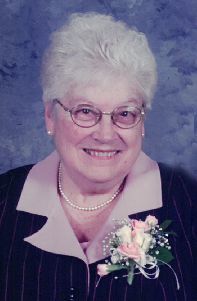 Myrtle Margethe Schroeder (Koch), age 92, of Appleton, passed away on Sunday, April 23, 2017 at Willow Lane Assisted Living in Appleton. She was born on September 30, 1924 in Dike, Iowa to the late Hans and Jensine (Jensen) Koch. Her family moved to Neenah where she graduated from Neenah High School in 1942. She married Gordon Schroeder at Our Savior Lutheran Church in Neenah.
After graduating high school, Myrtle worked at Kimberly Clark until she started her family; then she helped on the farm. Years later she worked at Air Wisconsin until retiring in 1984.
Myrtle enjoyed to sew, knit, crochet, bake and quilt. She made many lap robes for the local retirement homes. Together Myrtle and her husband Gordon loved to travel, fish, play cards and bowl. Myrtle was also very proud of her Danish heritage.
Myrtle is survived by her son, Michael (Carol) Schroeder; her daughter, Paula (David) Bauman; four grandchildren, Jennifer (James) Spencer, Christopher (Tracey) Schroeder, Timothy (Monica) Bauman and Andrew (Katrina) Bauman; eight great-grandchildren, Christopher Spencer, Peyton Schroeder, Tyler Bauman, Kyle Bauman, Arial Bauman, Riley Spencer, Giovanni Bauman and Marcus Nigbor. She is further survived by many nieces, nephews and other dear relatives.
Along with her parents and husband, she was preceded in death by her sisters, Gladys Selle, Dolores Rieckmann; brother, Eugene Koch and her granddaughter, Peggy Bauman.
The Funeral Service will be held on Thursday, April 27, 2017 at 11:00 a.m. at IMMANUEL EVANGELICAL LUTHERAN CHURCH, 3705 Fairview Road in Neenah. Visitation will be held on Thursday starting at 9:00 a.m. until the time of the service with Rev. Paul Meier officiating. Interment will be held at Highland Memorial Park in Appleton. In lieu of flowers, memorial contributions in Myrtle's name can be made to Immanuel Ev. Lutheran Church. Online condolences can be made at www.wichmannfargo.com.
Myrtle's family would like to give a special thank you to Ron Wolf and his staff at Willow Lane Assisted Living. They treated her like family, we can't thank you enough.