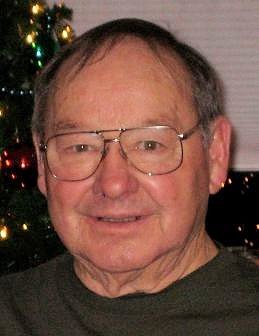 Myron “Wimpy” A. Drum, age 85, of Menasha, passed away at his residence on Tuesday, October 6, 2015. On April 4, 1930, Myron Allen was born in Gladstone, Michigan to Andrew and Ann Drum. Wimpy was a graduate of Stephenson High School in Michigan and shortly after enlisted in the United States Army. On September 24, 1955, Myron was united in marriage to the love of his life, Lorraine Aman, in Banat, Michigan. He had worked for George Banta Co. and retired from there after being employed for over 30 years. Wimpy was very athletic and pitched in many softball games. He loved hunting, fishing, watching the wildlife and spending as much time as he could at his cabin he built. This was his “Heaven on Earth” which displayed his incredible woodworking skills. When his family would come and visit, they would have campfires and he was known for his singing and humming. He also enjoyed golfing, and watching the classic Westerns on TV. Living in Wisconsin, he became a Green Bay Packer fan.
Wimpy will be missed by his loving wife of 60 years, Lorraine; their children: Bob (Beth) Drum, Tom (Judy) Drum, John (Ellen) Drum, Patti Drum, Deb (Ric) Reynolds, Jane (Todd) Miller; his grandchildren: Dan (Jenny), Bill (Stephanie), Amy (Sam), Michael, Jack, Max, Danielle, Luke, Hillary, Nick, Mandy (fiancé, Culin), and Noah; his great-grandchildren: Wyatt and Ozzie; brothers-in-law: Bill Aman and Mike (Margie) Aman Jr.; sisters-in-law: Betty (Bob) Klitzke and Sharon Aman; and his loving dog, Buddy.
In addition to his parents, he was preceded in death by his brothers: Raymond and Richard (Barb); his sister, Elaine (Lowell) Breiting; sister-in-law, Jenny (Ed) Mueller; and brother-in-law, John Aman.
The Memorial Mass will be held at 11:00 am on Saturday, October 10, 2015, at St. John the Baptist Catholic Church, 516 De Pere Street in Menasha, with Fr. Paul Paider officiating. A Memorial Gathering will be held from 10:00 am until the time of the Mass at the church. Military Honors will follow the service. In lieu of flowers, a memorial will be established.
The family would like to extend their gratitude to the caring staff of Affinity Hospice for their kindness and friendship shown to Wimpy, as well as all of the loving family and friends that came to visit during his final months.

Dad,
You were always the life of the party
and we will miss your awesome sense of humor.
Thanks for all the laughs, stories, and the best old fashioneds ever!