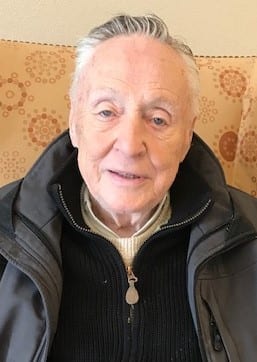 John was born in Waukegan Illinois in 1933, the first of four children in his family.  He had responsibility for his family at an early age.  He worked to take care of and provide for his family while he was still only a boy himself. He served very briefly in the Army National Guard and was discharged when they discovered that he was only 16 years old. He and his future wife Nancy Conover met and started dating while they were in high school.

John worked as a machinist at the American Can Company in Waukegan after graduating from high school.  He was there for only two years when the US Army called him to Korea.  After two years of service the Army encouraged him to reenlist with an “offer” to join the Airborne.  He thought it would be better to return home to Nancy.  John and Nancy married in 1955.  They moved to Champaign Illinois where John earned a Bachelor’s degree in Mechanical Engineering.

John rejoined the American Can Company as an engineer in Kansas City. That was the first of nine different assignments with the company.  The last four were as plant manager. John and Nancy raised their three boys during those busy years.  There was always time for the boys, Cub Scout meetings, Sunday hikes, camping with the Boy Scouts or a fishing trip.

Neenah Wisconsin was their last stop with American Can.  John retired from the company in 1995.  John and Nancy have remained in Appleton since then. They loved their home on the north edge of town, feeding the wildlife that lived with them on five acres of suburban wilderness. They moved to the Touchmark community in Appleton a year ago.

John passed away peacefully at the age of 86 on January 24. Nancy was by his side. John is survived by his wife Nancy, sons Dan and John, grandchildren Laura and Matt and two great-grandsons.  He was preceded in death by his son Richard.

A private service for John will be held at a later date.