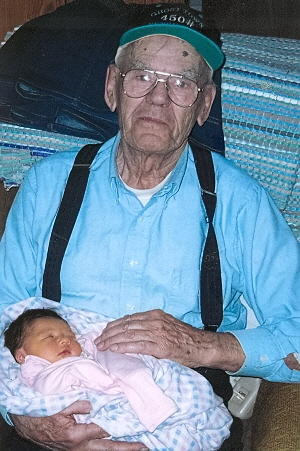 Age 92, died peacefully at home with his family at his side on Monday, November 24, 2008. He was born in Oss, Holland on September 18, 1916, son of the late Frank and Marie Zwiers, and had been a Kimberly resident for the passed 58 years. Morris was proud to work for Thilmany's for 23 years and enjoyed his active 30 years of retirement. He was particularly proud of his family, especially his great-granddaughter, Phoenix, who kept him laughing and smiling for the last 20 months. His wife of 68 years, Gertrude, preceded him in death on May 4, 2004. Morris is survived by his daughter, Carol Hooyman of Freedom; two sons and daughters-in-law: Leonard and Grace Zwiers of Forest Junction and James and Hideko Zwiers of Kimberly; eight grandchildren: Don (Sharon) Hooyman, Tim (Tracy) Hooyman and their dog, Munch, John (Kelly) Hooyman, Wayne (Sandy) Hooyman, Jeff (Chris) Hooyman, and Jamie, Jack “JJ”, and Miki (Tamara) Zwiers; great-grandchildren: Nanette Gerritts, Ryan, Brooke, Luke, Kori, Matthew, Alex, Carter and MiliJo Hooyman, Pheonix and Maylahni Zwiers; great great-grandchildren: Hunter and Spencer Gerritts; sister Anna; and brother, Michael; and other family members and friends . He was preceded in death by his wife, Gertrude; grandson, Buddy Hooyman; and brothers: Antone, Frank, Arnold, and Carl Zwiers; and son-in-law, Don Hooyman. The funeral service will be held at 11:00 a.m. on Friday, November 28, 2008 at the funeral home with John Hartzheim officiating. Friends will be received at the funeral home on Friday from 9:00 a.m. until the time of the service. Burial will be in Holy Name Cemetery, Kimberly. The family extends a special thank you to the staff at Theda Care at Home Hospice for their wonderful Care.