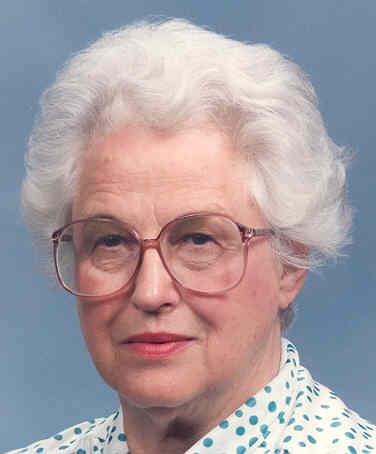 Miriam Clapp Duncan
Age 83
of Appleton, passed away on Friday May 9, 2003 in St. Paul, Minnesota.
She was born on October 26, 1919 in Anderson, Indiana to the late Joseph and Anna Clapp. On July 13, 1943 she married Clyde Duncan in Anderson, Indiana.

Miriam received her bachelor‚Äôs and master‚Äôs degrees from the American Conservatory of Music in Chicago, where she studied with Leo Sowerby. Later, she studied in Europe with Anton Heiller, Marie-Claire Alain, Luigi Tagliavini and Gustav Leonhardt. Professor Emerita Duncan taught organ and harpsichord at Lawrence University Conservatory of Music (where her husband Clyde taught piano and composition) for over 40 years. Her efforts and those of her students (the ‚ÄúTracker Backers‚Äù) were largely responsible for the purchase and installation of the Brombaugh tracker organ in the Lawrence Memorial Chapel in 1994. She continued to teach privately and to serve as a consultant on organ installations until near the end of her life. Her former students remain an enormous influence in the classical music world in the United States and in Europe.

Miriam is survived by a daughter, Anne Duncan-Welke, son-in-law, Darrell Welke and their children, James and Katherine. She is further survived by a son, Jonathan Byrd Duncan, St. Paul and a sister-in-law, Frances Clapp, New Castle, Indiana.

Miriam was preceded in death by her husband, Clyde, her parents, sister, Mary Cordelia, and brothers Herbert and Harold.

Friends may call on Tuesday, May 13, 2003 at the funeral home from 5:00 PM until 9:00 PM, and also one hour prior to Mass on Wednesday May 14, 2003 at church. A Mass of Christian Burial will be celebrated on May 14, 2003 at 11:00 AM at St. Mary Catholic Church (312 S. State St.) in Appleton with Father Michael O‚ÄôRourke officiating. Entombment will take place at St. Joseph Cemetery in Appleton. Memorials may be directed in her name to Lawrence University and St. Mary Catholic Church.