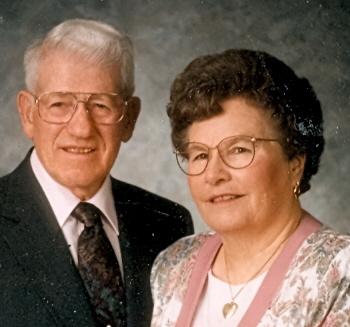 Minnie C. Ven Rooy, 89, joined her husband in eternal life, late on Sunday, November 20, of non-smokers' lung cancer at the St. Paul Villa, Kaukauna, where she lived since August 2011.

On June 4, 1942, she was united in marriage to Martin E. Ven Rooy at St. John‚Äôs Nepomucene Catholic Church in Little Chute and shared almost 52 years of marriage on their rural Kaukauna farm, until his passing from lung cancer on March 5, 1994.

She was a hard-working true farmer‚Äôs wife, toiling hand-in-hand with her husband in the fields and twice daily milking cows. They rarely took vacations until after they retired in 1978. For 17 additional years after her husband's passing, until August of this year, she continued to maintain her rural home until her mobility became an issue. In late September, lung cancer was diagnosed.

Minnie gained many life-long friends from her involvement in Romeos & Calicos square dancing, playing cards, bowling, oil painting, traveling, and going to friends‚Äô cottages in the North country. She was a long-time member of Holy Cross Catholic Church where she was active in the Christian Mothers, served as a Eucharistic Minister and visited the sick as a member of the Visiting Committee. She was a frequent Daily Mass worshipper, traveling from her farm home, even in the snowiest of conditions. She also volunteered at the 1000 Islands Environmental Center. And she loved ‚Äòher‚Äô Packers, even saying a prayer they would win each game without injuries.

In addition to her belief in and deep devotion to God, she had a genuine love and concern for others. If you helped her, she would be sure to send a thank you note–a lost art today. She loved the homestead, her outdoor plants and the garden. Riding her stationary bike was a regular routine. Winning at Rummikub was one of her desires.

One of her fun achievements was going in a hot air balloon ride at the age of 72 with her sister, Martha Vanden Boogart.

Survivors of her husband‚Äôs family include one sister-in-law, Viola Van Rooy, DePere, and one brother-in-law, Peter Cortes, LaCanada, California.

She was preceded in death by her parents, two sisters and two brothers-in-law, Arthur (Agnes) Ebben, Henry (Mary) Gloudemans); two brothers and one sister-in-law, Martin and Joseph (Marian) Joosten; and two other siblings at a young age.

Thanks to great neighbors, Marv and Imelda Hietpas and Dan and Doris Verboomen, as well as Minnie‚Äôs younger sister, Martha, for their help and support in her later years. A great thank you to Paul and Ellen at St. Paul Hospice Services and the caring staff at St. Paul Villa for their compassion and love.