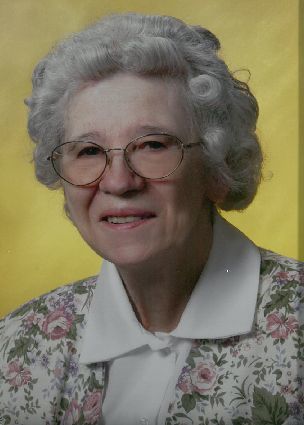 Mildred M. Berg, age 94, of Appleton, passed away on Friday, July 8, 2016. She was born on June 3, 1922 to the late Edward and Elizabeth (Pelky) Kelpinski in Bear Creek, Wisconsin. Mildred married the love of her life Gerald Berg on October 16, 1944 and they were blessed with nine children.
Caring for such a large family was a full time job for Mildred, between house chores and tending to the farm she had little time for herself. She was known for her baking and cooking; her family still remembers the large meals she would prepare after the cabbage harvests. Mildred's faith was apparent in all that she did, she prayed fervently and enjoyed praying the rosary.
She is survived by her nine children, Mary (Lawrence) Fenske, Eugene Berg, Emmett (Jan) Berg, Rita (Dan) Kringel, Rose (Dwight) Wickesberg, Aggie (Joe) Reis, Tom (Faye) Berg, Bernadette (Robert) Peterson and Nick Berg. Mildred is further survived by twenty-three grandchildren, thirty-three great grandchildren and many nieces, nephews and other relatives.
In addition to her parents she was preceded in death by her husband, Gerald, on July 5, 1990; her granddaughter, Sheena; daughter-in-law, Hattie and her three brothers, Orville, Victor and Merlin.
The funeral liturgy will be held on Wednesday, July 13, 2016 at 11:00 a.m. at ST. EDWARD CATHOLIC CHURCH, N2926 State Road 47, Appleton. A time of visitation will be held on Wednesday starting at 9:00 a.m. until the time of the service at 11:00 a.m. at church. Interment will be held at St. Edward Cemetery. In lieu of flowers, a memorial fund has been established in Mildred's name. Online condolences can be offered at www.wichmannfargo.com.
Mildred's family would like to thank the staff of Brewster Village and Affinity Hospice for the wonderful care given to her.