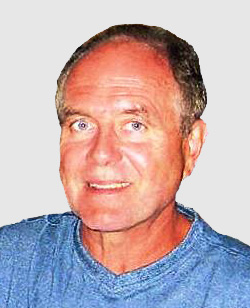 “I have fought the good fight, I have finished the race.” It is with heavy hearts that we announce the peaceful passing of Michael Lee Mertz, on Friday, August 10, 2018 in Neenah, Wisconsin, surrounded by family and friends. Mike was born July 13, 1948 in Neenah, the son of the late Ronald and Shirley (Hoffman) Mertz. He attended Neenah High School and graduated in 1966. He went on to college at the University of Wisconsin-Oshkosh, earning his bachelor degree in education. Mike married the love of his life and dearest friend, Judy Koslowski, the daughter of Eugene and Lorraine Koslowski, on July 13, 1974 in Menasha. Mr. Mertz, as the thousands of students who passed through his classroom knew him, was employed with the Menasha Joint School District from 1971, until retiring in 2003. He recently celebrated his 70th “Birth-Aversary” and 44th Wedding anniversary.

Mike will be remembered for his sly and witty sense of humor and sparkling blue eyes. He was known to say, “I only tease the ones I like!” He loved grocery shopping and the cooking that followed, making wonderful meals for family and friends. You never went home hungry! He also enjoyed relaxing at their cabin in the Northwoods, spending time on the lake, fishing and boating. Lastly, he was especially fond of traveling, having embarked on several cruises with family and friends.

In addition to his parents, Mike was preceded in death by his parents-in-law, Eugene “Sweetka” and Lorraine Koslowski.

A Memorial Gathering will be held for Mike from 3-6 PM on Wednesday, August 22, 2018 at Wichmann Funeral Home-Laemmrich Chapel, 312 Milwaukee St., Menasha, WI 54952. Inurnment will be in St. John Cemetery, Menasha at a later date.

Mike’s family would like to extend a special thank you to the entire staff at American Grand in Neenah for the wonderful care they gave him at his temporary home. He considered you all his second family. They would also like to extend their sincere appreciation to Dr. Sunil Kumar for the compassion he showed Mike and his family in his last few days.

When you were born you cried and the world rejoiced
Live your life in such a way that, when you die, the world cries and you rejoice.

Loved, respected and missed. I'm glad we were brothers. – Steve

You have left me with many great memories growing up together. I am so thankful for you, my dear big brother. Love you always and forever. – Patti

You made a very positive impact in our life. We will miss you dearly but you will always be in our hearts. Love you. -Brenda and Gary

I loved you then
I love you still
I always have and always will
Keep me in your heart and I will stay there forever.
– Judy