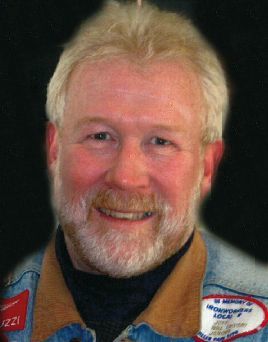 Michael “Mike” Petersen, age 63, of Appleton, passed away with family at his side on Sunday, July 3, 2016. He was born on December 8, 1952 to Charles and Dorothy (Drolette) Petersen in Oconto, Wisconsin.
Mike graduated from Appleton West High School in 1971 and continued to Northwestern Technical College where he learned the skills to be an Iron Worker. He was employed with the Iron Workers Local #8 for over thirty years before his retirement.
For anyone who knew Mike it was well known that he was a “detailed” conversationalist and was always able to strike up conversation. He enjoyed racing and not just any kind, Mike loved motorcycle and mud drag racing. He also liked to hunt, fish and above all spend time with family and friends.
He is survived by his loving fiancé, Eileen Steinke; his daughter, Katherine (Luke) Kingree; his mother, Dorothy; six siblings, Chuck (Carole), Paul (Camille), Barb (Steve) Sonkowsky, Sue (Dale) Bowers, Carol (Don) Draeger and Amy (Dan) Degenhart. He is further survived by his fiancé's mother, Miriam and her siblings, Maureen (Tim) Baumhardt and Dennis (Meg) Steinke, his daughter's mother, Laura (Les) Wyman as well as many nieces, nephews, other relatives and friends. He was preceded in death by his father, Charles Petersen.
The memorial service will be held on Thursday, July 7, 2016 at 12:00 p.m. at WICHMANN FARGO FUNERAL HOME, 537 N. Superior Street, Appleton. A time of visitation will be held on Thursday starting at 10:00 a.m. at the funeral home. In lieu of flowers, a memorial fund is established in Mike's name. Online condolences can be expressed at www.wichmannfargo.com.