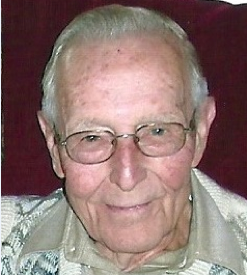 Michael L. Sambs (Bud) passed away peacefully on Friday, June 1, 2018. He was born in Tigerton, WI on August 12, 1927, the son of Frank and Lena (Westphal) Sambs.
Mike was drafted into the Army in 1946 and ran a commissary store with fellow servicemen for officers in Occupied Japan. On April 20, 1955 he married Lillian Suess in Menasha. Mike was a plumber by trade starting his career with Ripple Plumbing in Menasha and retired from August Winters after 25 years. He was proud to be a member of the United Association of Journeymen and Apprentices of Plumbing and Pipe Fitting for over 65 years.
Mike was well known for his volunteerism with multiple associations. He was a Hunter Safety Instructor for 45+ years and a volunteer fireman with the Village of Harrison #2 Fire Department for 43 years. He was also recognized for 26 years of service as an elected Constable and 12 years of service as an Appointed Enforcement Officer, and also served as a Court Commissioner for Judge Hugh Nelson for Calumet County. In his senior years he served as a commissioner for the Village of Harrison (Waverly) Sanitary District and the Neenah-Menasha Sewage Commission. He was a long -time member of St. Mary Catholic Church in Menasha.

Mike loved his house on Lake Winnebago that he shared with his wife Lillian. He was an avid fisherman and hunter. For many years he and his friends traveled to Melon, Wisconsin, to pursue big bucks in the back woods. He also loved going to his land in Tigerton to spend time with his family and especially the grandchildren. Mike learned to make beautiful leaded, stained-glass works of art including lamps, birds, ducks, loons, butterflies, angels, sailboats, glass window panes and crosses, all of which he happily gave to friends and family.

Mike is survived by his daughters, Mary Grishaber (Dave) and Julie Stilp (John), two granddaughters, Elaine Tripp (Jason), and Anna Grishaber, two grandsons Eric Stilp (Dani) and Justin Stilp. Mike is also survived by his brothers Kenneth and Charles Sambs, sister Jean Sambs, and brother-in-law Tom Suess, along with many of “the cousins”. Mike’s wife of 61 years, Lillian, preceded him in death along with his parents Lena and Frank Sambs.

Mike had many friends, family, and former co-workers that visited him at Oak Park Place during the last months of his life and his two daughters greatly appreciated their visits. The family would like to thank the staff at Oak Park Place, ThedaCare Hospice, Mary, Amber, and Claudia, and Laura Tucker at the VA Clinic for the compassionate care Mike received.