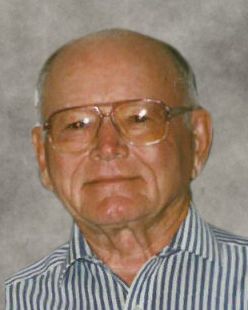 Michael “Mike” A. Milton, age 96, passed away peacefully at home on Monday, March 12, 2018. He was born on February 20, 1922 in Kaukauna, son of the late Michael and Eleanor (Berken) Milton. On September 11, 1947 he married Patricia “Pat” McCabe at St. Paul Catholic Church in Wrightstown and they were fortunate to have celebrated 70 years of marriage.

After graduating from Kaukauna High School, Mike proudly served in the United States Army from 1942 until March 1945 and rose to the rank of Staff Sergeant with the 80th Engineer Battalion. Mike received the Meritorious Unit Award while in the Army.

Mike and Pat moved to Gillett in their early years of marriage to own and operate a grocery store. Upon their return to Kaukauna they owned and operated Mike’s Market on Lawe Street. Mike also worked at Thilmany Paper Company for over 30 years where he retired as a supervisor in 1986. Mike was very active in his retirement years and enjoyed volunteering at St. Vincent de Paul, bowling, golfing, ice fishing and going to the casino. He was an avid reader, kept up with current events and followed the Packers and Brewers. Mike was a member of the Kaukauna American Legion Post 41 for 55 years, Thilmany Quarter Century Club and the Knights of Columbus Council (Post 41) for 57 years. Mike was a long time member of Holy Cross Catholic Church in Kaukauna.

The Funeral Liturgy will be held on Monday, March 19, 2018 at 11:00 a.m. at HOLY CROSS CATHOLIC CHURCH, 309 Desnoyer Street in Kaukauna. Visitation will be held on Monday starting at 9:00 a.m. until the time of the service with Fr. Jim Vanden Hogen officiating. Military honors will follow the service. Interment will be held at Highland Memorial Park in Appleton. In lieu of flowers, a memorial fund will be established in Mike’s name. Online condolences can be shared at www.wichmannfargo.com.

Dad & Grandpa, you were always kind, gentle, generous and loving. We never heard you say a harsh word about anyone. Thanks for being the best father and grandfather. We love you.