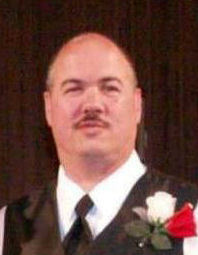 Michael Skeens, age 45, of Appleton, passed away unexpectedly on Monday, September 2, 2013 at St. Elizabeth Hospital. He was born on October 22, 1967, in San Diego, California, the son of Lowell F. and Sharon (Hirnschall) Skeens. Mike graduated from Appleton East High School in 1986. He served his country in the U.S. Army for almost ten years. Mike was employed in the maintenance department at R.R. Donnelley in Menasha for 25 years. Mike enjoyed going to the races at W.I.R. and NASCAR, camping, and most of all being with family and spending time with Kim. He loved going to local band concerts, collecting football cards, and being the life of a party. On June 8, 2013, Mike married Kim (Muthig) Fenske at Faith Lutheran Church in Appleton.
Michael is survived by his wife, Kim Skeens; daughter, Brandi Skeens; step-sons: Christopher Fenske and Nicholas (Nicole) Fenske; parents, Lowell and Sharon Skeens; parents-in-law, Robert, Sr. and Darlene Muthig; brothers-in-law: Robert, Jr. (Dawn) Muthig and Jeffrey Muthig; and sister-in-law, Tracey (Dan) Mielke; along with their cat, Sammy; and dogs, Shadow and Prince. He is further survived by his nieces, nephews, great nieces and nephews, other relatives and many friends.
The funeral service for Michael will be held at 11:00 am on Friday, September 6, 2013 at Faith Lutheran Church, 601 E. Glendale Avenue in Appleton. Rev. Aaron Rosenau will be officiating. A time of visitation will be held on Thursday at the Wichmann Funeral Home downtown chapel from 4:00 pm until 8:00 pm, and again at the church from 9:30 am until the time of service. Online condolences can be offered at www.wichmannfargo.com.