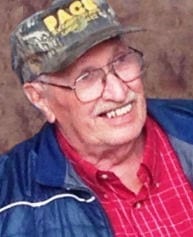 On June 14, 2020, at 85 years of age, Merlin “Spike” Hein passed away peacefully after a short battle with Cancer.  Merlin was born on March 28th, 1935 in Appleton, WI to Martin and Helen (Tennie) Hein.  He was part of a large family of German heritage, the youngest of 9 children.

He married Anna Marie Verkuilen in 1960.  One of Merlin’s desires was to “Make it” to their 60th wedding anniversary on April 30th – Well done Dad.   They have 3 fine sons: John, Robert and Donald.

Merlin served his country in both the Army and Marine Corps.  He was very proud of his service and his time spent traveling in Germany.  He returned from the service and worked for Kimberly Clark Corporation at the Lakeview Tissue Mill.  He was a proud KCer for 42 years.  During that time, he proudly served Local 482 as the union president for many years.  He loved that role and negotiating contracts on behalf of his Union Brothers and Sisters.

In his retirement, Merlin was the ultimate handy man – taking part in numerous home remodels, additions and even a cottage build.  He was the founding member of the highly successful Hein Renovations LLC.

Merlin is survived by his wife, Anna Marie, their children John (Amy), Robert (Kathy), & Donald (Erin).  Merlin was especially proud of his Grandchildren: Alex, Ben, Kassi, Chloe, Jaxson and Rylinn.  He is also survived by one brother, the celebrated author Jerry Hein and sister Alice (Plog).

Merlin was preceded in death by Parents: Martin and Helen, Brothers: Clarence, Tom, Robert, and Florian and Sisters: Dolores (Dexheimer) and Marie (Ferron)

We would like to offer heartfelt thanks to the staff at the Ascension Cancer Center, Hospice Nurse Jenny and The Birch Cottage Team at Peabody Manor, who treated Dad with such wonderful care and respect.

A private family Funeral Mass will be celebrated for Merlin at 10 AM on Friday, June 26th, 2020, with Military Honors following. You are welcome to view the mass via Livestream, which can be found on this obituary page on the day of the mass.

In lieu of flowers, please consider contributions to the Ride for Hope Foundation (Oncology Nurses Supporting Cancer Patients) at https://www.paypal.me/fvrideforhope.

“The Quality of Life outweighs its Quantity”

Please leave a special message or condolences for Merlin’s family below.