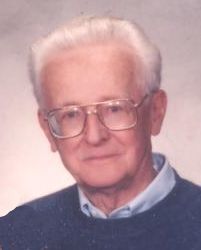 Melvin E. “Sam” Bartelt, age 95 of Appleton passed away unexpectedly on February 2, 2017 at his home. Melvin was born on January 25, 1922 in Wolf River Wisconsin to John and Flora (Mischke) Bartelt. He was a 1940 graduate of Kiel High School. At that time, he was the youngest and proud member of the Kiel Municiple Band, playing the trombone. He served his country honorably as a member of the US Army during WWII; a Staff Sergeant under Gen. George Patton with the “Mighty 277th” Field Artillery Battalion, including 9 months of continuous combat, and earning four Bronze Battle Stars. After the war ended, he picked up the trombone again, and with other soldiers, formed a dance band called The Victorians. With the support of the Army Special Services, they toured Europe, performing for the troops. Under the G.I. Bill, he attended the University of Wisconsin-Madison where he received a Bachelor Degree in Business Administration and became a life-long fan of the Badgers. On May 26, 1947 he married R. Virginia Dhein in Sheboygan Wisconsin. Having grown up together as neighbors and school classmates, they then enjoyed nearly 70 years of marriage and total devotion. Melvin was employed with Voith, Inc. as a Controller and Treasurer and retired from there in 1987 after 37 years with the company. He spent years traveling with his beloved wife, enjoying woodworking, and golfing regularily through age 93. He was a charter member of St. Thomas More Catholic Church in Appleton.
He will be sadly missed by his wife Virginia; daughters Mary (Antonio Veloso) Bartelt of Swansea, MA, and Betsy (Matt Welter) Bartelt of Allouez, WI; son Tim Bartelt of Appleton, WI; grandson Andrew Veloso of Swansea, MA; sister Betty Stevenson of Oshkosh, WI, and brother John “Bump” (JoAnn) Bartelt of Oshkosh, WI.
He was preceded in death by his son Michael Bartelt and his sister Eva Stelzner.
Funeral services for Melvin will be at St. Thomas More Catholic Church, 1810 N. McDonald Street in Appleton on Monday February 6, 2017 at 11:00 am with Fr. Gerald Falk officiating. Visitation will be on Monday from 9:30 am to 11:00 am at the church. Interment will be at St. Joseph Cemetery in Appleton. For more information and to express condolences, please visit www.wichmannfuneralhomes.com.