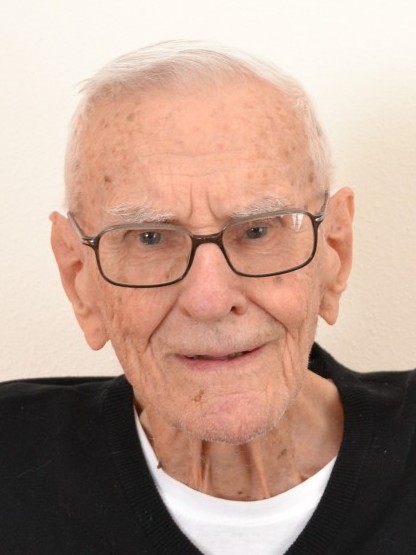 He was born February 20, 1927 in Van Dyne, son of the late George and Hattie (Vogler) Buetow. He was the youngest of seven children, being predeceased by his two brothers, Henry and Norman, and his four sisters Marie, Ada, Anita and Alta.

Mel began his education in a one-room schoolhouse in Van Dyne, WI and eventually graduated from the University of Wisconsin-Madison in January 1951 with a Bachelor of Science degree in Civil Engineering.

On February 2, 1951 Mel and the love of his life, Shirley Volkman, were united in marriage at Grace Lutheran Church in Oshkosh.

Mel’s engineering career began in California, working in the aeronautics industry for Douglas Aircraft. He then returned to Wisconsin, where he specialized in the pulp and paper industry. Beginning at the Combined Locks Paper Mill, he later joined S. J. Baisch Associates Inc., Kaukauna, and worked there for 30 years until retiring.

He participated in numerous sports, including golf, horseshoe pitching, fishing for muskies up north, bowling, curling, and playing sheepshead. He also had a keen interest in presidential and US history, and enjoyed music, especially Lawrence Welk. In later years, Mel cherished the companionship of his two cats, that he adopted from his dear friend Bunny Plutchak upon her passing. He relished in watching his grandchildren at their various sporting events, and was their biggest fan.

In lieu of flowers the family kindly requests that memorial donations be made to the St. Jude Children’s Research Hospital, 501 St. Jude Place, Memphis, TN 38105 or at St. Jude.org.

A very special thank you to the staff and residents of Brookdale Senior Living, and Home Instead Senior Care for the loving and compassionate care and friendship they provided to Mel.

Mel will always be remembered as a wonderful husband, father, and grandpa, and was regarded by all who knew him as a kind, gentle and honest man.