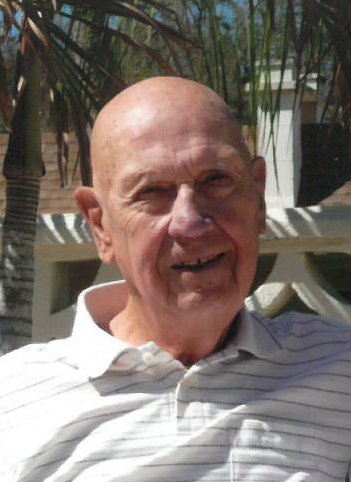 Melvin Gorges, age 96, of Appleton passed away on November 19, 2017. Melvin was born on November 22, 1920 in New London, WI, the son of Arthur and Leona (Seefeldt) Gorges. He was baptized at St. John’s Lutheran Church, Town of Caledonia, and was confirmed at Emanuel Lutheran Church in New London. He attended Lutheran grade school there for 8 years, and graduated from New London High School in 1938. Following graduation he was employed at the Borden Company and was there for 30 years. Being a member of Emanuel Lutheran Church, he served on several different boards there, and was a very active member of the church.

He married June Mathison on June 9, 1945 at Grace Lutheran Church in Winchester, and they made their home in New London. They were blessed there with two children - Terry and Carol.

In 1970 they were transferred to Van Wert, Ohio with the Borden Company where he was a supervisor there for 12 years until the plant closed. He was a very active member in their church in Van Wert, holding several offices and serving on many boards. After retiring in 1984 they moved back to Appleton where he lived a busy life, always working and fixing things, taking pride in his garden and immaculate lawn and shrubs. He took his daily walks, went to the YMCA, played cards, bowled (was even in a Wii bowling league until a week before his death) and enjoyed fishing at his son’s cottage. He loved music and played (by ear) on his piano and organ. He liked golfing at Countryside in Kaukauna where they had a membership for several years. He enjoyed the Bible Class at church, being a greeter there, and singing at the nursing home. He looked forward to going to Florida every winter for three months and making so many friends there. He loved playing cribbage with his son, who came over 4-5 times a week in the morning to play an hour with his dad. He especially loved his visit to his daughter and son-in-law when they lived in Athens, Greece. He and June celebrated 72 years of marriage this year. What a great life he had!

In 2012 they sold their home in Appleton and moved to Ridgeview-Highlands where he continued to enjoy bowling, cards, and other activities at the clubhouse.

Visitation for Melvin will be on Friday, November 24, 2017 from 9:00AM to 11:00AM at St. Paul Lutheran Church, 302 N. Morrison Street in Appleton. Funeral Services will be at St. Paul Lutheran Church on Friday at 11:00AM with Rev. Peter Walther officiating. Interment will be at St. John Lutheran Cemetery in Caledonia, Wisconsin. For more information and to express condolences, please visit www.wichmannfuneralhomes.com.