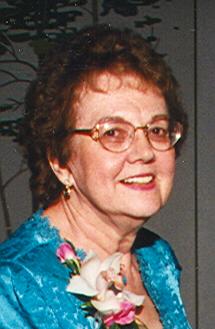 Kramer, Maxine Ann 80, of Appleton, went peacefully to be with the Lord Feb.25th, 2006 at St. Elizabeth‚Äôs Hospital. She was born to Thomas and Cecelia Hardy on New Years Day, 1926 and grew up on their family farm in the town of Ellington, WI. She graduated first in her class from Appleton West High School in 1943. At 19, she was first employed by the Federal Government with Agricultural Adjustment Agency and also held other jobs as a bookkeeper. Maxine and Don were first introduced by co-workers on a blind date. They were engaged on Valentines Day and later married on June 2, 1951 at St. Joseph‚Äôs Church in Appleton. Together they raised four children in Appleton and were blessed with eight beautiful grandchildren.
Maxine was a fun-loving Irish girl. She loved music and dancing and kicking up her heels with the Stardusters Dance Club. She also enjoyed bridge club, golf outings, travel, History, British humor, flowers and sweet treats.
Maxine and Don were founding members and active supporters of St. Bernadette Catholic Church. Her special interests were Serra Club, the Cursillo movement, Liturgy planning, Bible study and teaching religious education. Maxine volunteered as a ‚Äúpink lady‚Äù at St. Elizabeth‚Äôs Hospital. She loved welcoming newcomers to the area while employed with Select Welcome Service. However, most of her married life as a homemaker was spent raising her children and enjoying her grandchildren.
Maxine encouraged, supported and provided for those in need. Her strong faith in God, a positive attitude and tenacious spirit helped her to overcome many challenges and struggles. She had a love for people and a zest for life.
She will be deeply missed by her children: son, Mark Kramer and daughters, Teresa (Bill) Werner, Janet (Wayne) Hoffmann and Carole (Tom) Gulbransen and grandchildren: Laurie (Daniel) Holt, Michelle Werner: David, Emily and Margaret Hoffmann: Zachary, Hannah and Hailey Gulbransen. She is also survived by her brothers Frank (Sally) Hardy, Norbert (Marge) Hardy and sister Janette (Tom) Woods. She was preceded in death by Donald, her husband of 54 years and her sisters Geraldine (Matt) Rossmeissl, Patricia (Bob) Besaw, Cecelia (Clay) LeMere and brothers Owen (Lyda) Hardy and Thomas (Ione) Hardy.
Funeral services will be held on Thursday March 2nd at St. Bernadette Catholic Church, 2331 E. Lourdes Dr., Appleton at 11:30 a.m. with Rev. Don Zuleger officiating. The family will receive friends at the Wichmann Funeral Home on Wed. March 1st from 4-8 p.m. followed by a prayer service at 8 p.m. Visitation will also be at the church on Thursday from 9:30-11:30 a.m. The interment will be at St. Mary‚Äôs Catholic Cemetery, Appleton. A memorial fund will be established in her name. Special thanks to all those who loved and cared for Maxine.