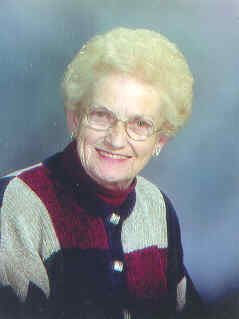 Passed away peacefully due to complications from a stroke, with family at her side on July 12, 2001. Mary‚Äôs children are grateful to family and friends, and especially Mary‚Äôs sisters, Kate and Pat, and brother, Jim, for their loving support and comfort during the difficult weeks of Mary‚Äôs illness.
Mary was born on November 2, 1930, in Appleton, Wisconsin, to Patrick and Rose (Feeley) Heenan. She graduated from St. Mary‚Äôs Academy in Prairie du Chien, Wisconsin, in 1948 and attended Mount Mary College in Milwaukee. Mary was married to Edward C. Holtz on January 31, 1953. Mary and Ed raised five children; Mary Beth (Buck), Katie, Rose, Fred, and Anne. She and Ed resided in Appleton until 1978. Because of their careers in minor league baseball, Mary and Ed resided in various cities in the United States including Knoxville, Tennessee; Chattanooga, Tennessee; Tucson, Arizona; Sumter, South Carolina; and finally settled in Macon, Georgia.
Mary came home to Appleton in 1996 to begin a life of retirement and advanced Grandmahood. Mary was grateful for the many lasting friendships that developed due to her travels. She knew she was blessed to have shared her life with so many kind people from so many different cities and backgrounds. She will be missed by many good friends throughout the United States.
Mary‚Äôs career (but never her personality) was overshadowed at times by Ed, because of his great successes in minor league baseball. However, as the saying goes, ‚ÄúBehind every great man is a great woman.‚Äù Mary‚Äôs role in minor league baseball was many faceted. She was concessions operator, ticket manager, office manager, mother, wife, and friend. She was involved with successful baseball operations that included affiliations with the Chicago White Sox, Toronto Blue Jays, Cleveland Indians, Seattle Mariners, Houston Astros, and Atlanta Braves. She retired from baseball while employed by the Atlanta Braves, after contributing much to their successful run in the 1990s that included their only World Series Championship in 1995, the same fall that Ed passed away. Mary gracefully departed the game after speaking at her late husband‚Äôs induction in the South Atlantic League Hall of Fame in Asheville, North Carolina, and throwing out the first pitch at ‚ÄúMary Holtz Day‚Äù in Macon, Georgia, on August 31, 1996.
‚ÄúTo know her is to love her,‚Äù is what seems to best describe Mary. Whether working at the ballpark, shopping at the grocery store, attending Mass, working in the parish office, selling tickets at the theatre, lunching with the girls on Mondays, playing bridge on Wednesdays, listening to her police scanner, swimming with the ‚ÄúMermaids,‚Äù or spending time with the many wonderful caregivers at the end of her life, there was definitely something special about Mary. Life around Mary was always full of love and laughs. The Irish sparkle in Mary‚Äôs eyes and her contagious sense of humor stayed with her to the very end. We thank God for letting Mary be a part of our lives.
Heaven will be a more special place for all of us, knowing Mary and Ed are there.
Mary is survived by four daughters, Mary Beth (Phil) Koss, Katie (Steve Truog) Holtz, Rose (Curt) Wentzel, and Anne (Jeff Theimer) Olson-Theimer, and one son, Fred Holtz. Further survived by special family friend, Michele VandenHeuvel. Also survived by grandchildren: Jessica and Matt Reeves; Thomas and Margaret Koss; Matt, Tim, Caitlin, Michael and Curtis Peck; Eddie Holtz; Maryrose and Daniel Wentzel; John Edward Holtz; Rachel and Sam Olson; Emily Koss; Steven, Mark, and Daniel Truog; and Brandon, Jacob and Hannah Theimer; two sisters, Catherine Hahn, and Patricia (Harold) Blanshan; one brother, Jim (Virginia) Heenan, two sisters-in-law, Erna (Harold) Houtz, Anne (Pete) Gray; one brother-in-law, Tom (Jean) Orbison. Further survived by cousins, nieces and nephews. She was preceded in death by her husband, her parents, her sister, Rosemary, a brother-in-law, Tom Hahn and a sister-in-law, Daisy Orbison.
The funeral liturgy will be on Monday, July 16, 2001, at St. Mary Catholic Church, 312 South State Street, Appleton, Wisconsin at 11:00 a.m. with Fr. Bob Lexa officiating. Friends will be received at the funeral home on Sunday from 4:00 p.m. until the time of The Rosary at 7:30 p.m, and again on Monday directly at the church from 9:30 a.m. until the time of liturgy. Interment will be at St. Mary Cemetery, Appleton, Wisconsin.
In lieu of flowers, memorials may be made to the family, c/o Wichmann Funeral Home.
Special thanks for the Theda Care Inpatient Hospice Unit for their loving care and comfort.