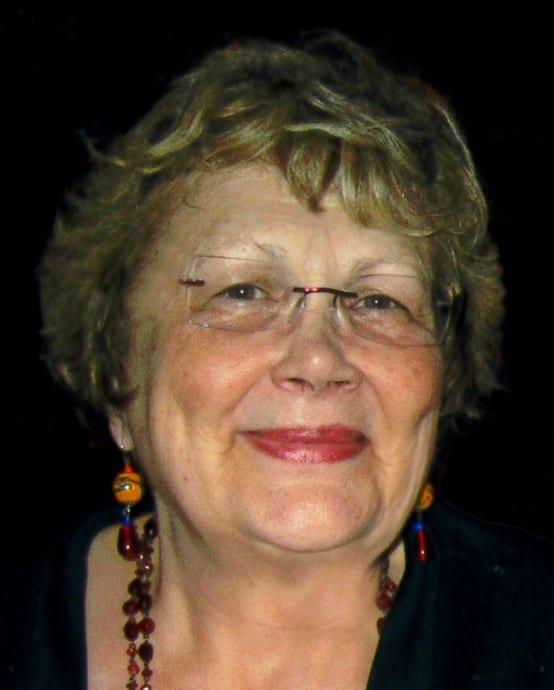 Mary Rose Derus (née Eslien) of Kaukauna, entered eternal life on Saturday May 30, 2020. She is survived by her children Leah Derus and Nicholas (fiancée Mallory Willkom) Derus, her former husband Don Derus, her siblings and their spouses Jack Eslien, Kathy (Bob) Zelinski, Greg (Simone) Eslien, and Margaret Eslien, her nieces Heather, Jennifer, and Jill Eslien, and nephews Steven and Greg Zelinski, her close friend and cousin Mary Hague of Kaukauna, close friend Helen Renn of Appleton, and close friends Marilyn and Mike Davidson of Crandon. Mary – lively and gregarious – grew her circle of lifelong friends to include too many people to name here.

She was a true raconteur – always ready with a story to delight her listener. Sometimes these tales were the stuff of family lore – like when her father, Richard Eslien, pulled up to their home on Sarah Street in Kaukauna with a fish fry and fixings for his family of eight, only to realize – to everyone’s dismay – that he’d forgotten the meal on the roof of the car before setting off from Speedy Mitchell’s. Other times it would be a personal foible that served as material – there was the day when she reunited with her runaway pet skunk, Munk, on the train tracks behind Roloff Manufacturing, only to discover (too late) that it was not her cherished (and surgically de-scented) pet after all. Days of tomato juice-fueled baths ensued.

Mary held a bachelor’s degree in education from the University of Wisconsin – Platteville. Her first job, in the mid 1970’s, was at one of the most economically disadvantaged elementary schools in Beloit. Mary would use her meager salary to provide breakfast and snacks to students who often came to school hungry. In addition to loving children, she was especially kind to animals and older people. Later in life she worked at Saint Fidelis Friary in Appleton, an assisted living facility for the Capuchin friars of the Province of Saint Joseph. The friars’ mission is to attend to the poor and disenfranchised and so, Saint Fidelis was a fitting place for Mary who always put others’ needs ahead of her own. Many prayers and condolences have been extended by the friars who recall Mary’s kind words and actions. Mary was a lifelong Catholic and active member of Saint John’s parish in Little Chute.

In lieu of flowers, those who wish may make a donation to St. Fidelis Friary 1100 N. Ballard Rd. Appleton, WI 54911 or support abused and neglected animals by making a donation to this U.S.-based charity afghanstrayanimals.org