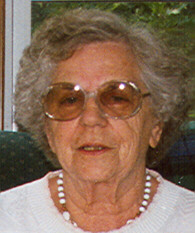 Mary Rose (Brum) Hahn, passed away at Manor Care on Friday, February 8, 2008, with her daughter and her friend, Mary at her side. She was the last surviving child of the late Joseph Sr. and Rose (Winter) Brumm. Mary was born in Appleton on June 25, 1920 and resided in Appleton her entire life. On August 22, 1940 she married Carleton Hahn; he preceded her in death on September 2, 1976. Mary had been employed by Zwicker Knitting Mill for more than 32 years. She was a member of St. Joseph Catholic Church. Mary liked playing Bingo and trips to the casino. Mary is survived by her son, Richard Hahn, Stevens Point; her daughter, Jean Hahn, Appleton; two grandchildren, Derik (Allicia) Hahn, Cary, IL and Tasha (Ken) Jaworski, Stevens Point; four great grandchildren, Melanie and Ryan Hahn, Jake and Jada Jaworski; her sister-in-law, Gladys Brum; brothers-in-law, Wayne, Rodney and Delroy (Marge) Nitzband; and many nieces and nephews. She was preceded in death by her five brothers, Joseph Jr. (Vivian), Frank (Marie), Louis (Evelyn), Leo (Betty, Janell) and Henry (Alvira), three sisters, Rose (Jacob) Van Dinter, Anna Brum, Theresa (James) Holzer, and a daughter-in-law, Bonnie Hahn. Funeral services for Mary will be held at 10:30 am, Monday, February 11, 2008, at St. Joseph Catholic Church, 410 West Lawrence Street, with Father David Belongea officiating. Burial will be in St. Joseph Cemetery. Friends may call at the church from 8:30 am, Monday, until the time of the mass. A memorial fund is being established.

Mary's family would like to thank the staff of Manor Care for their love and support.