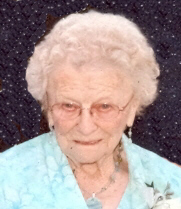 Mary Brautigan, 90, of Kaukauna, passed away on Sunday, October 3, 2010 at the St. Paul Home. She was born on July 9, 1920 in Maple Grove, Wisconsin, the daughter of the late Frank and Mary (Gussert) Vondracek. On January 31, 1942 she married George Brautigan at Holy Cross Catholic Church in Kaukauna, where she has been a faithful member. Many will remember her smile, her laugh and her willingness to lend a helping hand to family and friends. Toots was a talented cross stitcher, a great cook and enjoyed many hobbies and loved to travel. Her greatest talent was being mom, grandma B and grandma GG.

The funeral liturgy for Mary will be held at 11:00 am on Thursday, October 7, 2010 at HOLY CROSS CATHOLIC CHURCH, 309 Desnoyer Street, Kaukauna. Father Tom Pomeroy will be officiating. Burial will take place in the parish cemetery. The visitation will be held at the church from 9:00 am until the time of mass. In lieu of flowers, memorials to St. Paul Elder Services are appreciated.