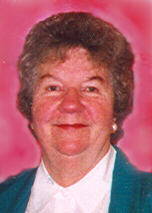 Mary M. Kelpinski, age 88, of Appleton, passed away on Tuesday, September 7, 2010, at St. Elizabeth Hospital. Mary was born on July 1, 1922, in Five Corners, Outagamie County, to the late Jake and Genevieve (Van Asten) Schuh. She married Merlin E. Kelpinski on September 20, 1944; he survives. Mary was employed in the Sears Catalog Department in Appleton for over 42 years, retiring in 1984. She was a well-known volunteer at St. Elizabeth Hospital and St. Joseph Catholic Church kitchen. Mary enjoyed card playing and was a member of several card clubs and, together with Merlin, enjoyed square dancing and had many happy years at their cottage in Waupaca. Survivors include her husband of 65 years, Merlin; her children, David (Anita) Kelpinski, Dianna Kelpinski, Dan Kelpinski and Debbie (Dave) Ganzen; her grandchildren, Rick (Lynn) Kelpinski, Dawn (Ken) Marquardt, Kelly Ganzen and John Ganzen; her great grandchildren, Kristina Marquardt and Casey and Lindsay Kelpinski; her brothers, Don (Pat) Schuh, Roger (Nancy) Schuh, Gene (Bernadette) Schuh, Vern (Ann) Schuh; and her sister, Glady (Harry) Vanden Boogardt. She was preceded in death by her brother, Bob Schuh. The Funeral Liturgy will be at 10:30 a.m. on Friday, September 10, 2010, at ST. JOSEPH CATHOLIC CHURCH, 410 W. Lawrence Street, Appleton, with Fr. Jim Leary officiating. Friends may call directly at the church on Friday from 9:30 a.m. until the time of services. Interment will be in St. Joseph Cemetery. The family would like to extend a sincere thank you to the staff of Rennes Health Care and the staff of the Second Floor at St. Elizabeth Hospital for their loving care.
Wichmann Funeral Home
537 N. Superior Street
Appleton 739-1231
Online Condolences
www.wichmannfargo.com