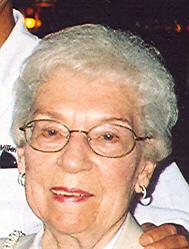 Mary Jo Hoolihan, 90, of Kimberly, passed away peacefully on Friday, December 31, 2010 at St. Paul Elder Services. She was born on June 18, 1920 in Kimberly, the daughter of the late Theodore and Josephine (DeGroot) Wydeven. Mary Jo graduated from Kimberly High School ‚Äì Class of 1938. During her years at Kimberly High School, Mary enjoyed drama and had a role in every school play. She served in the U.S. Navy during World War II as a dental technician from 1944 ‚Äì 1946. On September 24, 1946 she married Richard Hoolihan at Holy Name Catholic Church in Kimberly. She was a member of Holy Spirit Parish in Kimberly. Mary Jo was a dental assistant with Dr. Deloria in Kaukauna until they started a family. Dick and Mary bought Wydeven‚Äôs Shoe Store on Main Street in Kimberly from Mary‚Äôs father in 1949. They operated Hoolihan‚Äôs Shoe Store in the same location on Main Street until Dick‚Äôs retirement in 1983. Mary has always enjoyed supporting Kimberly athletics, as well as, attending her children and grandchildren‚Äôs sporting events. At the Kimberly High School Homecoming in 2004, she was honored for being the author of the Papermaker‚Äôs school song. She was active in three bridge clubs, and she enjoyed cooking, needlework, golfing and gardening. Mary was meticulous about her appearance and home. Family was extremely important to her and she was a dedicated wife, mother and grandmother.

The funeral liturgy for Mary Jo will be held at 12:00 noon on Wednesday, January 5, 2011 at HOLY SPIRIT PARISH ‚Äì KIMBERLY, 600 E. Kimberly Avenue with Rev. David Beaudry officiating. Burial will take place at the parish cemetery. Friends will be received at the church on Wednesday from 10:00 am until the time of mass. Please join us immediately following the mass for military honors. In lieu of flowers, a memorial fund has been established in her name.

The family extends their appreciation to the staff at St. Paul, especially Sister Dorothy, Mary, Margie, Tina and Mike for their compassion, dignity and respect shown to our mother and family during her stay.

Mary will always be remembered for her loving dedication to her family.