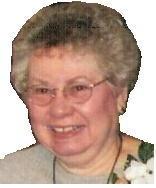 Mary Jane Witter, age 76, passed away early on Saturday morning, June 27, 2009. Mary Jane was born in Appleton on April 1, 1933, daughter of the late Walter and Dorothy (Murphy) Van Hoof. She graduated from Appleton High School, and on May 5, 1953 married Amil Witter in Freedom. Amil preceded Mary Jane in death in 2000. Over the years, Mary Jane was involved in many volunteer and other activities. She volunteered at Holy Spirit Parish by teaching catechism, serving as a Brownie and Scout leader, and also helped with the school reading program. She was a member of the Catholic Knights, Telephone Pioneers of America, Kimberly Homemakers, and was a former member of the American Legion Auxiliary. In her free time, she enjoyed knitting, crocheting, crossword puzzles, and playing cards. She also spent a lot of time in the kitchen cooking and baking.

The funeral liturgy for Mary Jane will be held at 11:00 AM on Tuesday, June 30, 2009 at HOLY SPIRIT PARISH, 600 E. Kimberly Avenue in Kimberly with Fr. Jim Vanden Hogen officiating. Entombment will be in Highland Memorial Park. Friends may call at the church on Tuesday morning from 9:00 AM until the time of the service.

The family would like to offer their sincere thanks to the outstanding caregivers at Grand Horizons that kept mom so comfortable in her final months and days. The nurses from Heartland Hospice who made regular visits were also wonderful to all of us. We will never forget your kindness and care.