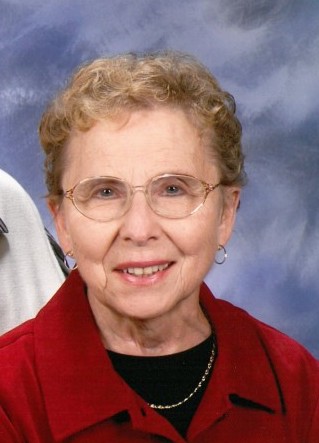 Mary J. (Schuessler) Van Asten, age 85 years of Little Chute, Wisconsin, passed away peacefully with her family at her side on June 29, 2017 from metastatic breast cancer. She was born November 25, 1931, the daughter of Michael and Marie (Arentz) Schuessler.
On August 23, 1951 she was united in marriage to Gerald A. Van Asten and moved with him to Virginia during his service in the US Navy.
They returned to Kaukauna, Wisconsin where they owned and operated a dairy farm located on Kavanaugh Road for 35 years. In 1990 they retired from farming and resided near their farm the following years.
Mary was active as a volunteer for Hospice for 22 years, a member of Riverside Homemakers for over 50 years. She was a member of Holy Cross Church and active in the Elizabeth Ministry. In her retirement years she enjoyed working at Kings Variety stores. Her love for flowers, crafts and baking were enjoyed by many. The greatest joys in her life were her faith, family and friends.
She is survived by her two daughters Diane Schmidt, Menasha and Sharon (Joe) Kapitany, Illinois.
Three sons Steve, Madison, Gary, Florida and Randy (Mary), Appleton. Five grandchildren Ryan Van Asten, Nicole and Daniel Schmidt, Joshua and Aaron St. Louis.
She is further survived by two brothers and sister-in-laws Ralph (Lucille) Schuessler, Michigan, Lloyd (Lois) Schuessler, Kaukauna. She is also survived by her husband's family Grace Gebhart, Appleton, Sister Cyril Marie Van Asten, Racine, Romunda Van Asten, Stockbridge, Lee Roy (Mary) Van Asten, Kaukauna, Betty Bast, Little Chute, James (Bernice) Van Asten, Appleton, John (Jane) Van Asten, Combined Locks, Joyce (Phil) Bruecker, Kaukauna, Marcy (Ron) Siebers, Menasha, Ivo (Noni) Van Asten, California and Anna Marie Van Asten, Florida. She is further survived by numerous nieces and nephews (8 are godchildren) and godchild Nancy Vanderloop, Little Chute.
She was proceeded in death by her husband Gerald in 2011, two infant sons, Michael and Dale, her parents Michael and Marie Schuessler, an infant sister Ethel, and Gerald's parents John and Martha Van Asten, brothers-in-law Donald and Kenneth Van Asten.
Visitation for Mary will be on Saturday, July 1, 2017 from 10:30am to 12:30pm at Holy Cross Catholic Church, 309 Desnoyer Street in Kaukauna. Funeral Mass will be on Saturday at the church at 12:30pm with Fr. Tom Pomeroy officiating. Interment will be at St. Mary Cemetery of Kaukauna at a later date. For more information and to express sympathies, please visit www.wichmannfuneralhomes.com.
Her family wishes to thank all of her relation and friends for all the prayers, love and help bestowed upon their mother. Also thanks to the residents and staff at Greenfield Manor Apartments during the years she had the pleasure to know each of you and you her. Special thanks to St. Paul Hospice staff; especially Lauren, Julie and Kelly whose compassionate physical, emotional and spiritual care carried her and her family through a difficult time. You will all be remembered fondly.
In lieu of flowers a memorial fund has been established for the American Cancer Society and St. Paul Hospice.
Dear Mom: It was because of your examples of kindness, patience, caring, love and compassion that we became the persons we now are. All our unending love. Diane, Steve, Randy, Gary and Sharon.
“Though my life on earth is over I will be with you always”
Mary.