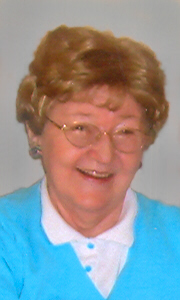 Mary Frances Mader Leopold, 85, died June 6, 2011, at Appleton Healthcare Center after a lengthy illness. She was a life-long resident of the city. Mary was born on May 15, 1926, the daughter of George E. and Hilda (Kamps) Mader, the second of five children. After attending local schools, she graduated from Appleton High School in 1944. Mary Mader and Robert G. Leopold, a World War II veteran, were married on October 1, 1946, in Appleton. The couple lived in Appleton and Neenah. In 1962 they moved back into her parents‚Äô home in Appleton. Along with raising her six children, Mary helped care for her parents. She was the matriarch of a large family that included 14 grandchildren and 11 great-grandchildren. She was a life-long member of St. Therese Catholic Church. Her quick wit and spontaneous sense of humor will be greatly missed.

Mary was preceded in death by: her parents; husband Robert, who died in August 1974; a sister, Katherine and husband, Ves Gregorious; brothers H. George Mader and wife, Wilma; and brother Thomas Mader.

The Funeral Liturgy will be at 11:00 a.m. on Friday, June 10, 2011, at ST. THERESE CATHOLIC CHURCH, Morrison Street at Wisconsin Avenue, Appleton, with Fr. William Hoffman officiating. Friends may call at the funeral home on Thursday from 4:00 p.m. until 7:00 p.m. and again directly at the church on Friday from 10:00 a.m. until the time of services. There will be parish prayer and scripture service at the funeral home at 7:00 p.m. at the funeral home. Interment will be in St. Joseph Cemetery, Appleton.

The family would like to extend a sincere thank you the staff at Appleton Health Care for their loving care. A memorial has been established in her name.