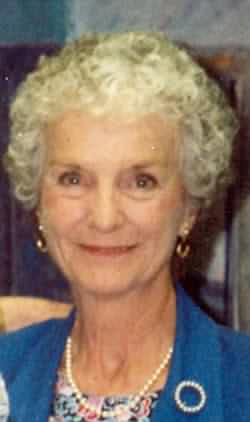 Age 82, passed away on Friday April 4, 2003 at Brewster Village. She was born on October 6, 1920 in Cincinnati, Ohio the daughter of the late John and Lily Sue (Ziegler) Davidson. On October 4, 1949 she married George M. Connelly in Chicago. She was active in retail sales in Chicago, Michigan and South Carolina; and moved to Appleton in 1993. She volunteered at St. Elizabeth Hospital from 1993 to 1995.
She is survived by her daughter Dr. Mary A. (William Frackelton) Connelly of Chilton, her son George M. (Beth) Connelly of Savage, Minnesota, and her two grandchildren Caitlin Frackelton of Chilton and Joseph Connelly of Savage, Minnesota. She was preceded in death by her husband George in 1958, and her two sisters Cecelia Shaw and Marge Dixon, and her parents.
A memorial service will be held on Wednesday, April 9, 2003 at 7:00 PM at the Wichmann Funeral Home with Deacon Pete Reinl officiating. Interment will take place at Riverside Cemetery. The family will greet relatives and friends on Wednesday from 5:00 PM until the time of the services. In lieu of flowers, a memorial fund is being established.
WICHMANN FUNERAL HOME
537 North Superior Street
Appleton 739-1231