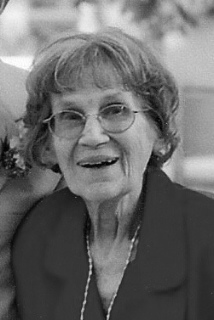 Mary Alice Lindo, age 90, passed away on Friday, August 17, 2012, at Heartwood Homes Senior Living in Appleton. Alice was born in her grandmother Agnes Reagan Blell's home in Saint Louis, Missouri on May 21, 1922, daughter of the late Joseph and Mary Agnes (Blell) Jablonski. She grew up in Jennings, Missouri, an early suburb of Saint Louis. She graduated from Corpus Christi Catholic Grade School and Jennings High School. She contributed during World War II by working at St. Louis Ordinance Plant from 1941-45, where she met her future husband, Elmer Woodrow Lindo. They married in 1948 after his tour of duty with the United States Marine Corps in the South Pacific and the occupation of Japan. He preceded her in death in 2001.
Alice and Elmer raised their family and lived their 52 years of married life in Jennings where they were active members of the community. Music was an integral part of Alice's life. From singing her children to sleep every night to wearing out records of her favorite crooners – Frank Sinatra and Dean Martin – music was always present. Alice particularly loved Broadway musicals which she often listened to while doing housework. Comedy was another interest that she passed on to her children. The sounds of Spike Jones, Stan Freberg, Ernie Kovacs, et al. were familiar in the Lindo home. While the children were young she took her turn as den mother, PTA leader, band booster and many other volunteer positions. After raising her family, Alice worked as a proofreader for Bernadette Business Forms. Following her retirement she tutored elementary students, visited the elderly and sang in her church choir. When diagnosed with Alzheimer's, Alice moved to Appleton to be closer to her daughter, Nancy Lindo-Drusch, MD (Joseph H. Drusch) and spent six years at the Appleton Retirement Community before moving to Heartwood Homes in July 2012. She was a member of Saint Mary's parish during her years in Appleton.
She will be deeply missed by her children, Susan Ryan-Haupt (Jacob Haupt) of St. Louis, MO, Nancy Lindo-Drusch (Joseph Drusch) and John Lindo of Appleton and Charles Lindo (Cheryl Hendrickson) of San Francisco, CA; her grandchildren, Gretchen (Rudi) Haupt Brockfeld, Karen Haupt, Monica (Ryan) Wolf, Gregory (Chelsea) Drusch, Daniel Drusch and Maddie Drusch; her nephews Thad and Greg Hagen, Wayne (Joyce) Winter and Gene (Jeanette) Lindo. Alice was preceded in death by her sister and brother-in-law, Robert and JoAnne Hagen; sister-in-law, Verna Winter Boehning, her husband Ted, as well as her brother-in-law, Carl Lindo and his wife, Elsie.
The funeral liturgy for Alice will be held at 10:30 a.m. on Tuesday, August 21, 2012, at Saint Mary's Parish, 312 South State Street, Appleton, with Father Jim Leary, OFM CAP officiating. Friends may call directly at the church on Tuesday from 9:30 a.m. until the time of the service. Interment will be at Jefferson Barracks National Cemetery in St. Louis, Missouri.