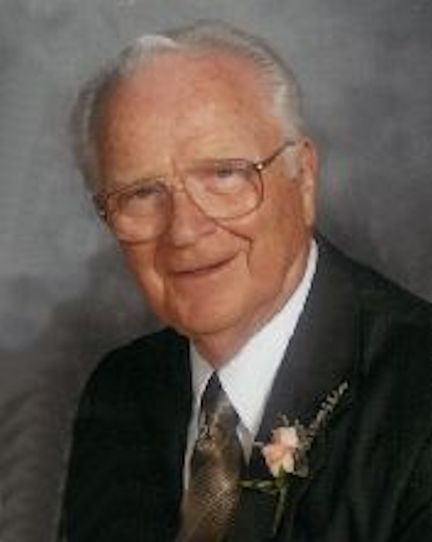 Phat proudly served his country as a Master Sergeant in the U.S Army. His time served spanned through WWII. Recently Phat took part in the Old Glory Flight to Washington D.C.

He married the love of his life, Doris Langman, on August 16, 1947 in Appleton at St. Joseph Catholic Church. They were blessed with their two daughters, Debbie and Becky.

In his early years Phat enjoyed softball, square dancing, bowling and visiting the YMCA. He and his wife Doris are life-long members of St. Joseph Catholic Church in Appleton. Phat had a creative and imaginative mind and loved to woodwork. He was a life-long Packer Backer and Wisconsin Badger Basketball fan. Above all he cherished being a dad, grandpa, great-grandpa and especially a loving and faithful husband.

In addition to his parents Phat was preceded in death by his in-laws, Charlie (Mamie) Langman; two brothers, Merrill and Myron; his brother-in-law, Donald Langman and many other dear relatives.

The Funeral Liturgy will be held on Wednesday, January 3, 2018 at 11:00 a.m. at ST. JOSEPH CATHOLIC CHURCH, 410 W. Lawrence Street in Appleton. Visitation will be held the night before at Wichmann Funeral Home, 537 N. Superior Street in Appleton on Tuesday, January 2, 2018 starting at 5:00 p.m. till 7:00 p.m. Visitation will resume the following day at church at 9:30 a.m. until the time of the Funeral Mass with Fr. Jim Leary, O.F.M. officiating. Military Honors will follow the Funeral Mass at church. Interment will be held at St. Joseph Cemetery in Appleton. In lieu of flowers, a memorial fund will be established in Phat’s name. Online condolences can be shared at www.wichmannfargo.com.

Phat’s family would like to give a special thanks to the staff of Primary Care Associates, Theda Care Regional Medical Center of Appleton, John Bradley VA Center, and the staff of St. Paul’s Elder Care Service for the wonderful care given to Phat and the compassion shown to his family. His family also extends their many thanks to Tony, Erin and Jade Spencer who have been wonderful neighbors through the years.