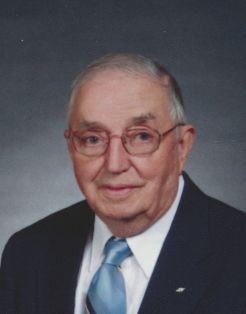 Marvin Knorr, age 88, of Appleton, passed away on Tuesday, February 19, 2013 at Heartwood Homes. He was born on July 17, 1924, in the Town of Bovina, the son of the late August and Clara (Tetzlaff) Knorr. On April 1947, Marvin married Janice Fink, they divorced in 1954. On October 8, 1960, Marvin married Betty Kubitz, who preceded him in death on October 25, 2000. Marvin and Ginnie Hoium married in November of 2001 and she preceded him in death in 2005. He was a member of the First Congregational United Church of Christ of Appleton, Appleton Masonic Lodge #349, Scottish Rite Valley of Green Bay, Beja Shrine Temple, and the Appleton Shrine Club. Marvin farmed in Black Creek, prior to working for 25 years at American Can. He was an avid golfer and bowler, and a dedicated Shriner for many years!
He is survived by his daughter: Sherryl (Robert) Breimeier, Chesterfield, Missouri; grandson: Russ (Leslie) Breimeier, Naperville, Illinois; grandson-in-law: Cory Burnett, Indianapolis, Indiana; great granddaughter: Casey Burnett; and a special friend: Eloyce Jencks, Appleton. Marvin is further survived by nieces: Clarica Erickson, Green Bay; Barbara (Dale) Knaack, Neenah; nephew: Bill (Kris) Foth, Appleton, and other relatives and friends.
He was preceded in death by his sister, Lenora (Elmer) Sachs; brother, Raymond Knorr; sister-in-law, Elaine (Ronald) Foth; granddaughter, Laurie Breimeier Burnett.
A committal service for Marvin will be held at 11:00 a.m. on Wednesday, May 8, 2013 at Riverside Cemetery in Appleton. Rev. Jane Anderson will be officiating. Memorials are appreciated for the Shrine Hospital. Online condolences can be offered at www.wichmannfargo.com.