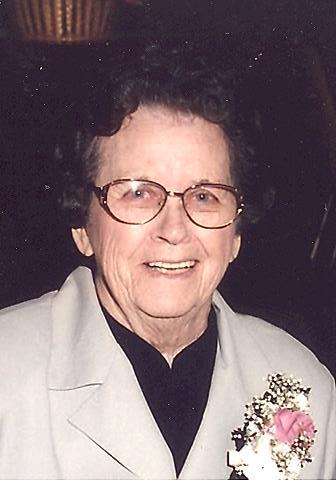 Martha Marie Woldt, 98, peacefully passed away at her daughter Carol's home on Friday, July 25, 2014. She was 5 weeks shy of her 99th birthday. Martha was born on August 30, 1915 to the late Joseph and Elizabeth (Hietpas) Van Handel. On June 15, 1939 she married Raymond R. Woldt at St. John Catholic Church in Little Chute WI. They celebrated 69 years of marriage until his death on August 25, 2008.

Martha lived a long and productive life. Being a mother and grandmother was her main focus. She was always involved in her children's, grandchildren's and great-grandchildren's lives and gave a helping hand whenever needed. When she and Ray lived on Ballard Rd, she had a large garden and loved to can and freeze as much as she could. She was an excellent cook and had a huge collection of recipes. Her specialties were carrot cake, doughnuts for the neighbor kids, chocolate chip cookies, buns and chocolate covered Wheaties.

Before they were married, Martha and Ray would go on flying dates in an open cockpit double-wing plane with Ray as the pilot. This was in 1938-1939 when they were in their early 20's. She said she could climb in the plane as easily as others would get in a car. She was a stay-at-home mom until her youngest child was in school. Then she worked at Lawrence University for 16 years in housekeeping. She enjoyed earning her own money and making friends with the staff and students. She also showed her independence later in life when, after Ray died, she lived alone until April 2014. A great day for her was having a visit from family or friends and enjoying one of her favorite foods – strawberries, cashew crunch, oatmeal raisin cookies, McDonald's apple pies, or KFC cole slaw.

Martha was a devout Catholic and loved her church, St. Thomas More in Appleton, of which she was a charter member. She attended mass until June, 2014. She cherished having Father Gerald Falk as her spiritual advisor and always felt special when he would bless her and call her name “Martha, Martha.” She also appreciated the weekly visit from fellow parishioner, former neighbor and friend, Betty Mauthe, to give her communion. They even came to visit Martha at her daughter's house in Ogdensburg during the last days of her life.

A time of visitation will be held on Monday, July 28, 2014 from 4:00 p.m. until 7:00 p.m. at the WICHMANN FUNERAL HOME, 537 N. Superior Street, Appleton. The Mass of Christian Burial will be held at 11:00 a.m. on Tuesday, July 29, 2014 at ST. THOMAS MORE CATHOLIC CHURCH, 1810 N. McDonald Street, Appleton with Rev. Gerald Falk officiating. An additional time of visitation will be held at the church from 9:30 a.m. until the time of the service. Entombment will be at Highland Memorial Park Mausoleum. In lieu of flowers, a memorial fund is being established.

The family would like to thank ThedaCare Hospice for their compassionate care of our mother and grandmother. Special thanks to nephew Erv Woldt for all his help and visits to Mom. The family would also like to thank neighbor and friend, Rose Smits, for her many phone calls and longtime friendship.

Remember me, my children through laughter, joy and cheer and do not weep for me in tears. Though I had to part, I will always be in your hearts. So remember me for I'm always at your side in spirit and someday we shall be together once again. With Love, Your Mother