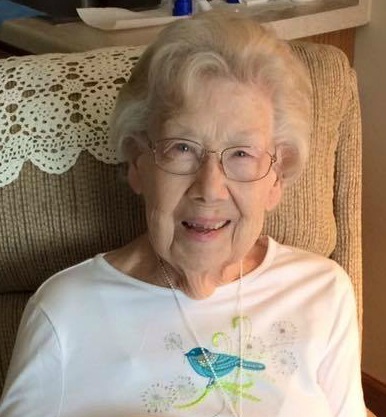 Martha graduated from Ottawa University in Ottawa, Kansas with a degree in music. She married Patrick Frank Elliott on June 4, 1950.

Martha was a member of the First Baptist Church of Ottawa. She was active in the church choir, Delta Kappa Gamma, and the Skilton Music Club. Martha taught music education in the Pomona, Kansas school district and later earned a Masters degree in Library Science at Emporia State University. She became the elementary school librarian in Gardner, Kansas until her retirement.

Martha had a great love for music. She was an accomplished pianist who shared that love with her many piano students and her family. Martha was a very kind and generous person. She enjoyed sewing, collecting Hummel figurines, card making, and jigsaw puzzles. She created many counted cross stitch and felt handmade Christmas stockings for her Children, Grandchildren and Great-Grandchildren.

Martha moved to Appleton, WI following her retirement, to be closer to her children. She was active in the Thompson Community Center choir in Appleton as a vocalist, pianist and conductor.

In addition to her parents, Martha was proceeded in death by her son, David Glenn Elliott, her brother, Robert Dick and her brother-in-law, Reverend Bernard Hawley.

Visitation for Martha will be on Wednesday, November 4 from 10:00 am to 11:00am at First Congregational Church, 724 East South River Street, Appleton, WI. A Memorial Service will follow immediately at 11:00am. In lieu of flowers, memorials may be directed to the Alzheimer's Foundation of America (www.alzfdn.org).

The family would like to express many thanks to the staff and nurses of St. Elizabeth Hospital and Heartland Hospice.