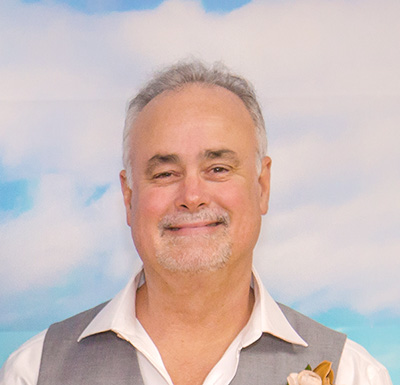 On Sunday, June 30, 2019, Mark Roovers, caring husband and father of two adult children, passed away unexpectedly at the young age of 61, due to a motorcycle accident.

Mark was born on September 3, 1957, in Appleton, Wisconsin, to Tom and Doris (Ardell) Roovers. On November 13, 1981, he married Kathryn Gerrits. The couple was happily married for nearly 38 years. Mark and Kathy raised two children together, Kristin and Jason, and spoiled two bright grandchildren, Izabella Roovers and Law Dorn.

Mark was a switchgear technician for General Electric for over 30 years. He had numerous hobbies, and an insatiable curiosity driving him to be a lifelong learner. He loved snowmobiling and riding his motorcycle, touring across country with his wife, Kathy, and friends.

Mark was an avid Packers, Brewers and Badgers fan and a music lover, practicing the drums and recently learning to play the banjo. Asking, “Who does it?” for every song was one of his favorite pastimes and he reveled in stumping the crowd and answering himself. It seemed he knew every song, lyric and artist. He was known for having fun, harmless pranks and a willingness to help anyone who needed a hand.

The grandkids so loved their Gramps, who would throw them on the bed, chase them around the house and fill their bellies with treats. Mark always formed connections with others. He was never far from his phone to send a text message or make plans.

Mark was preceded in death by his parents. He is now reunited with his beloved yellow lab, Lola.

Mark has said that he had everything in life and didn’t miss out on anything. He lived a full life in the short time he was with us, we just weren’t ready. Rest easy, you will live on in our hearts forever.