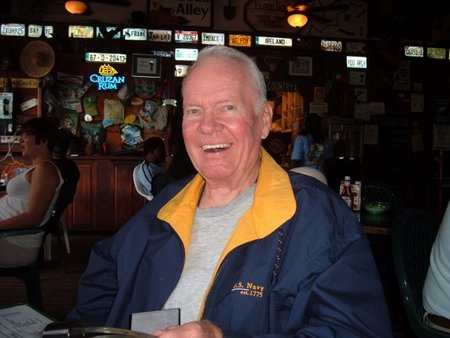 CDR Mark I. Diamon, USN, Retired, age 83, peacefully passed away at his home in Appleton on August 28th, 2013. Mark was born to Iva Pearl and Mark Edward Diamon in Toledo, Ohio September 26th, 1929.

Mark was the beloved husband of Mary Diamon (nee Harloff). They married in 1971 and treasured their 42 years of marriage together.

He was an honored Naval Aviator who served his country for 24 years in the U.S. Navy and retired with the rank of Commander. His passions included playing tennis, reading, wood working, boating, traveling, writing and politics. He received a Master's degree from the University of Wisconsin in Political Science. He was a history and geography buff and also had the beautiful gift of storytelling. He was a true family man.

Mark is survived by his devoted wife Mary Diamon. Mark is further survived by his daughters Anne (Randy) Diamon, and “AB” Ashley Bridgette (Derek) Hildebrandt. Mark treasured his grandchildren, Alex Diamon, Sarah (Steven) Dearen, and 1st Lt. Benjamin (Ashley) Diamon. Also dear to his heart were his great-grandchildren, Sophia (Ben and Ashley) and Iris, Reese, and Josie Mae (Sarah and Steven). He was preceded in death by his son and best friend Mark Allan (Maren) Diamon.

The memorial service for Mark will be held at 11:00 a.m. on Saturday, August 31, 2013 at WICHMANN FUNERAL HOME (537 N. Superior St., APPLETON). A time of visitation will be held from 10:00 a.m. until the time of service. Online condolences may be expressed at www.wichmannfargo.com.

The Diamon family would like to extend a heartfelt and sincere thank you to Jim Harloff for his unwavering support to Mark during his illness, to Mark's Mother-in-Law, Mary Harloff, to Derek Hildebrandt, and to all of the dear friends and neighbors who have supported the family during his illness. Mary and Ashley would like to express a very special thank you to Dr. Editha A. Krueger, the most devoted, caring, and gifted physician a family could ask for.