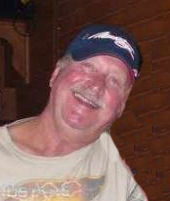 Mark Plotz, age 64, of Neenah, passed away peacefully surrounded by his family on May 18, 2013 at Theda Clark Medical Center. Mark was born on October 18, 1948, in Oshkosh, son of the late John and Lois Plotz. After graduating from Appleton West High School he proudly served in the United States Army stationed in Germany. Mark worked for over 35 years at the Neenah Foundry until his retirement in 2010.
Mark was an avid sports fan. He loved watching the Green Bay Packers and Nascar. He also enjoyed his morning coffee with “the boys”, listening to classic rock, driving his mustang and speaking fluent and colorful German. He will always be remembered as a loving father, grandfather, brother and good friend.
He is survived by his daughters, Julie (Todd) Keil, Lisa (Eric) Hall, Amy (Tim) Dorn, Andrea (friend Chris Lemmers) Plotz and Marki Plotz. He is further survived by his grandchildren, Skyler Plotz and Owen Nelsen; and his sister Paula (Kenneth) Meyer. He will also be missed by many other family members and friends.
The funeral service for Mark will be held at 6:00 p.m. on Wednesday, May 22, 2013 at the WICHMANN FUNERAL HOME (537 N Superior Street). A time of visitation will be held from 4:00 p.m. until the time of service. Online condolences may be expressed at www.wichmannfargo.com.
Mark's family would like to thank the ICU Bar, Dr. Bellg, and the nurses at Theda Clark Medical Center for all their thoughtful care.