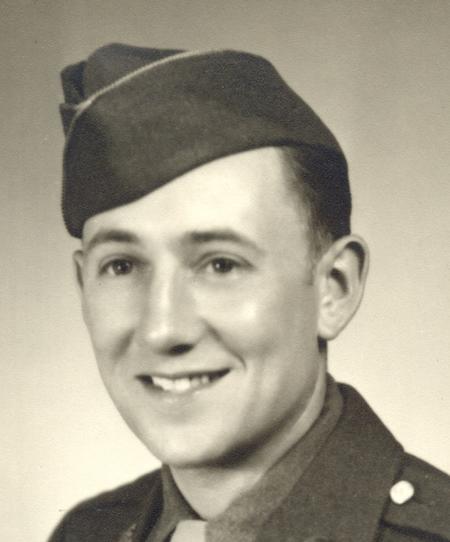 First Sergeant Mark A. Nagan, age 94 years young, passed away on Sunday, October 14, 2007 at Cherry Meadows after a brief illness. He is now with his Heavenly Father. Mark was born on July 26, 1913 in Kaukauna, son of the late Alphonse ‚ÄúFergie‚Äù and Bertha ‚ÄúMaude‚Äù (Rademacher) Nagan. He married Marie Schumann on February 22, 1941 at St. Mary Catholic Church in Kaukauna. She preceded him in death on February 25, 2005. Mark was drafted in November of 1942 into the 101st Airborne, and later transferred into the 82nd Airborne. He was a member in one of the glider units in the invasion at Normandy and a glider co-pilot into Holland. He fought his way to Berlin via the Battle of the Bulge and Siegfried Line, to name a few of the battles. He was also involved in opening up the Wobelin concentration camp in Germany. Mark ended his military career as First Sergeant in charge of training the 82nd Honor Guard in West Berlin. He was a member of the VFW Post 3319 for over 50 years, and was an active member of the Kaukauna Rotary Club for over 50 years. Mark was manager of Haas Hardware in Kaukauna for 50 plus years. He was a lifelong bowler, loved to garden, and play cards. He also loved his dog Laz and Wiley the cat. Mark is survived by his children: Mark T. (Anne), Bettendorf, Iowa; Barb (Dennis) Dietzen, Darboy; Pat (Cheri), Appleton; Joe (Nancy), Kaukauna; Dennis (Dar), Appleton; grandchildren, Cathy (Tito) Aquino, Tim (Jennifer) Dietzen, Jen (Eric) Drumm, Amy and Stacy Nagan, Joseph C. Nagan, Misty (Cory) Breider, Keri and Jesse Nagan; great grandchildren: Anna, Alison, Anthony, Cooper, Brittany, Jakob, Eli and Addison; a sister: Grace Hanby; and two brothers: Gene and Dave Nagan. Mark was preceded in death by his parents, his wife, a grandson, Mark M. Nagan; 2 brothers: Paul and Dr. Robert Nagan, and a sister: Carol Skibba.
The Funeral Mass will be held at 11:30 a.m. on Thursday October 18, 2007, at ST. KATHARINE DREXEL CATHOLIC CHURCH, ST.MARY SITE, 119 W. Seventh St., Kaukauna. Visitation will be at the church from 9:30 a.m. until the time of the Funeral Mass. Burial with full military honors will follow in Holy Cross Cemetery, Kaukauna.
In lieu of flowers please direct memorial donations in Mark‚Äôs name to The Community Hospice Foundation, 3000 E. College Avenue, Appleton, WI 54915 or
St. Paul Elder Services, Office of Development, 316 E. 14th Street, Kaukauna, WI 54130.

The family would like to thank Mark‚Äôs friend Corky, the Neurology department at Theda Clark Medical Center, Dr. Michael Krueger with Affinity Medical Group, and Dr. Coenen of the VA Clinic in Appleton, and other care givers over the years, most recently all those at Cherry Meadows Hospice.

From now on, 1st Sergeant Nagan‚Äôs skies will be clear, his canopies will be full, his breezes gentle, and his landings will all be soft. ‚ÄúAll the way‚Äù