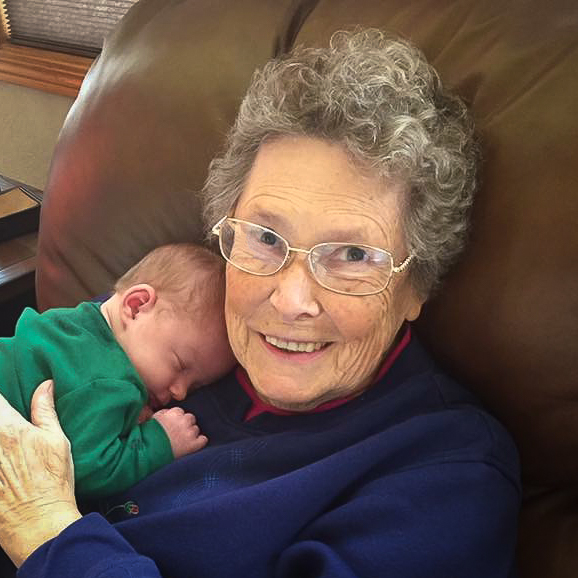 Marjorie “Marge” E. King passed away on Tuesday, January 16, 2018. Marge was a loving wife, mother, grandmother and great-grandmother. She is now at peace in Jesus’s arms where she is reunited with her husband Bob, and other beloved family members. Marge was born on January 7, 1932 to Laura and Willard Smith in Appleton, Wisconsin. She graduated from Appleton High School in 1950. Marge married the love of her life, Bob King, on September 22, 1951. They shared 64 years of marriage before his passing in 2016. They were the parents of 6 loved and devoted children. They were also blessed with 18 grandchildren and 23 great-grandchildren.

Marge worked in the Sears catalog department for 46 years. She then went on to work at Georgia Pacific for another 21 years before retiring at the age of 82. Marge was a charter member of St. James United Methodist Church, served on the Clothes Closet board of directors, and did volunteer work for the Salvation Army and Girl Scouts. Marge enjoyed a good game of cards, traveling, visiting state capitals (46 in total), cruises, attending all of her children’s and grandchildren’s sporting events, and the Game Show Network. Some of the best family memories were created playing Trivial Pursuit, especially when the ladies were victorious over the men.

The funeral service for Marge will be held on at 11:00 a.m. on Saturday, January 20, 2018 at ST. JAMES UNITED METHODIST CHURCH, 100 W. Capitol Drive, Appleton. There will be a time of visitation from 9:00 a.m. until the time of service. In lieu of flowers, a memorial fund has been established in Marge’s name. Online condolences may be offered at www.wichmannfargo.com.

The family would like to thank Dr. Stephen Fuller and the staff of Heartwood Homes of Appleton for their compassionate care.

Marge will always be remembered for her keen sense of humor, her competitive spirit, and her candy jar. Marge was never happier than when she was surrounded by her family.