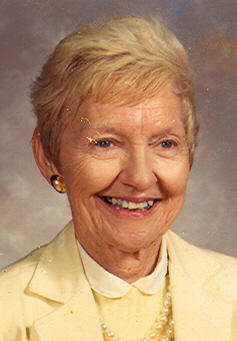 88, passed away peacefully with her family at her side on Friday, October 08, 2010.
Beloved wife, mother, grandmother, and great grandmother; Kip was born on May 20, 1922, the only daughter of the late Louis and Mary (Schneberg) Albrecht. Kip graduated from Green Bay West High School in 1940, and earned her bachelor's degree in music from Lawrence University in 1944. After graduation, she taught music in Brillion before accepting a position as a recreational music specialist with the Red Cross in Washington D.C. Returning from D.C., Kip married Clifford Vincent in 1946. She and Cliff resided in Appleton, and she taught music in the Fox Valley area for over 35 years, in Freedom, Appleton, Brillion, Menasha, and Kaukauna. Kip organized and directed the well-known YMCA Red Beret Chorus for 37 years. She also taught piano instruction to students of all ages at the YMCA, as well as aquatic exercise classes there for some 30 years. Her extensive community involvement included service as President of St. Elizabeth Hospital Auxiliary, and Grand Regent of Catholic Daughters of Christ Ave Maria Court No. 1011. As a freelance writer, Kip wrote for The Compass and Healthways. She composed a book of original songs entitled “A Christmas Walk,” and also hosted the “Kip Vincent Show” which ran on local cable access for over 20 years. Fondly known as “Mrs. Music” throughout the community, she always enjoyed working with children, whether at school, the YMCA, or teaching piano lessons, and she truly lived out her philosophy that “Life is what you make it!” When not busy with her musical pursuits, Kip enjoyed reading, golf, and traveling.

The funeral liturgy will be held on Wednesday, October 13, 2010 at 11:00 a.m. at ST. BERNARD CATHOLIC CHURCH (1617 W. Pine St.) in Appleton, with Father Dennis Ryan officiating. Visitation will be held on Tuesday, October 12 from 5:00 p.m. until 8:00 p.m., with a prayer service at 8:00 p.m. at the funeral home. There will also be one hour of visitation prior to the service at church. Entombment will take place at St. Joseph Catholic Cemetery, Appleton.

The family would like to express their sincere thanks for the loving care and concern Kip received from the staff and residents of the Stonecrest retirement community in Woodbury, Minnesota during her three years of residence there.