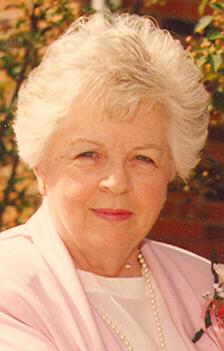 Marillyn Lee (Anglemier) Armstrong, 82, passed away Sunday, December 31, 2006. She was born on March 23, 1924 in Pontiac, MI to Robert & Mary Anglemier. She worked as Executive Secretary to the Editor for the Pontiac (Oakland) Press. After marrying William Armstrong, Jr. on June 12, 1948, she became a stay-at-home mother for her two daughters and four sons (3 of whom are triplets).
Marillyn loved to play piano, read mysteries, sew, smock dresses, quilt & cross-stitch. She also enjoyed helping out at Five Points Community Church in Auburn Hills, MI with the Ladies Radio & Bible Newsletter before moving to Wisconsin.

Funeral services for Marillyn will be held at WICHMANN TRI-COUNTY FUNERAL HOME on Oneida at Hwy 441 on Friday, January 5, 2007 at 7:00 p.m., with Pastor Dan Povolny officiating. Visitation will be one hour prior to service. Committal services will be at White Chapel Cemetery in Troy, MI on Monday, January 8, 2007, at 10:00 a.m.

The family wishes to thank the staffs at Fox River Assisted Living and Century Oaks Margaret House, Darboy, for their loving care during the last couple years.