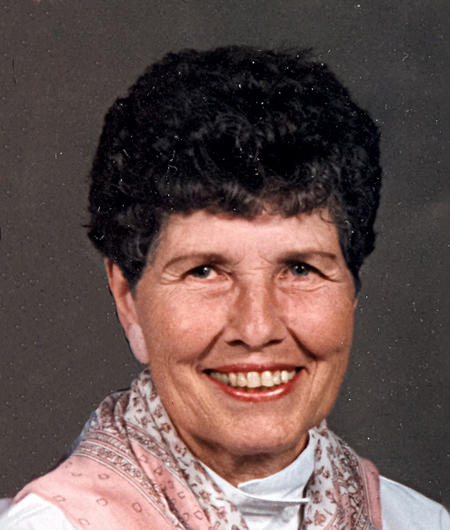 Marie J. Thiel, age 92, passed away gracefully and into the hands of God on Thursday November 15, 2012. She was born in Little Chute on September 21, 1920. Marie was united in marriage to the love of her life, Roger H. Thiel on May 4, 1946 who went to eternal life on May 8, 2003. She graduated from St. John's High School in Little Chute and was active in sports and cheerleading. Before Marie took on the enormous responsibility of raising a family of five, she worked as a secretary at Sears Roebuck & Co. and then at Pechman Photo Printing Lab where she colored black and white photos before colored film was made.

Marie and Roger enjoyed taking the kids on memory filled camping trips all over the country, first with a camper trailer, and then by motor home. Her joy was being with her kids, grandchildren and great grandchildren, babysitting was always something she looked forward to. After many years of camping her dream of building a beautiful cottage on Legend Lake came true. She enjoyed rides on their pontoon boat and watching the gorgeous sunsets on the lake. She loved to cook and bake, always preparing plenty of food for the family. She enjoyed baking and made the world's best apple pies. Marie also had a love for music, especially Big Band and Country music, always dancing the night away with Roger. They were always the first ones on the dance floor and the last ones to leave. Mom's unending devotion to helping her children in any way she could, at any time, will not be forgotten.

Marie was preceded in death by her parents, Arnold and Blanch (Pennings) Strick, her husband Roger Thiel, and brother William Strick.

The funeral liturgy for Marie will be held at 11:30am on Monday, November 19, 2012, at HOLY SPIRIT / HOLY NAME CHURCH, 600 E. Kimberly Avenue in Kimberly. Fr. David Beaudry will be officiating. A visitation will be held at the church from 9:00am until the time of mass. Interment will be in the Holy Name Cemetery. Online condolences can be expressed at www.wichmannfargo.com. In lieu of flowers, donations would be appreciated to the Greater Wisconsin Chapter of the Alzheimer's Association.

The family would like to extend our deep appreciation for the caring staff at Grand Horizon's facility, ThedaCare Hospice, Dr. Peg McEwen and Dr. Montgomery Elmer.