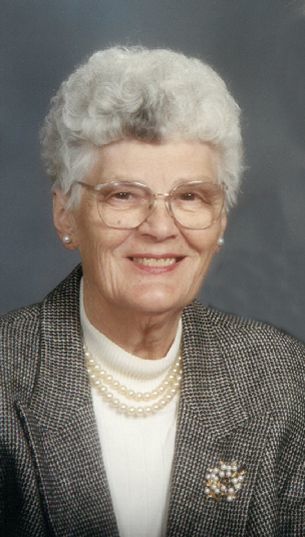 Marie Agnes (Salm) Heinritz, age 94, passed away on Friday, December 9, 2016 in Appleton, Wisconsin, surrounded by her family.
Born on February 23, 1922 during Appleton's worst ever ice storm, Marie was the eleventh of fourteen children born to Frances and Nicholas Salm. The farm house where Marie was born and raised still stands on Meade Street between Frances St. and Marquette St.
Marie attended St. Joseph's Catholic School near College Avenue, walking the three miles to and from school every day. As was common then, Marie graduated from school after ninth grade and did not continue through high school, but rather stayed home to help on the farm. A firm believer in education, however, Marie later attended night school at FVTC, proudly completing her GED certificate.
Marie was introduced to her future husband, Carl Heinritz, at Hahn's Bowling Alley by her brother Vic. Carl and Marie married on October 15, 1942 in Washington DC, where Carl was head of Communications for the FBI, under J. Edgar Hoover. They moved from Washington DC to Appleton, Wisconsin in 1946 and built their home on the Salm family farm.
“Skill and Grace” was how a Milwaukee newspaper reporter headlined his article about the athletic exploits of sixteen-year-old Marie Salm in 1938.
That same heading applies to Marie's life story. With Carl, her husband of sixty-five years, Marie led her family of eighteen children (eight girls, ten boys) by example, proving one of her favorite sayings that “through hard work you can accomplish anything.”
Whether teenager Marie was leading her Appleton women's softball team against arch-rival Green Bay, pitching a perfect game and hitting for the cycle; playing in the 1942 Women's World Series Fast Pitch Softball Championship in Detroit; taking up golf in her fifties and winning the Appleton Women's City Golf Tournament title at Reid Municipal Golf Course at age fifty-five; or raising a house full of eighteen (!) energetic and competitive children, Marie lived her philosophy that spiritual and mental dedication can overcome any challenge. But equally importantly, Marie always emphasized that life was a gift and should be enjoyed.
One of the most moving images would be to see Marie's tender interaction with her babies – her children, grandchildren and great-grandchildren, “her gifts from God”, as she called them. She showed that the more love you gave, the more you had to give. The children she raised with unrelenting care and fairness, through good times and hard, balancing challenge and encouragement, grew up with a can-do attitude and a great respect and joy of life – as a testament to her spirit: Her love was unconditional, shared freely, celebrated and proclaimed, every day of her life.
Marie is survived by her sister Clara Sprangers (Little Chute, WI).
And by her Children: Sr. Joann Heinritz Sisters of St. Joseph of Carondelet (Berkeley, CA), John and Agnes Heinritz (Santa Fe, NM), Janet and Tom Canterbury (Los Angeles, CA), James and Mary Heinritz (Denver, CO), Frances Collins (Minocqua, WI), Nicholas and Mary Heinritz (Appleton, WI), Barbara and Jim Bayer (Appleton, WI), Carl and Cheri Heinritz (Appleton, WI), Joseph and Cindy Heinritz (Weston, WI), Patrick Heinritz and Cindy Czajkowski (Madison, WI), Peter and Deborah Heinritz (Kaukauna, WI), Therese McCarthy (Scottsdale, AZ), Claire and Robert Wolstein (Templeton, CA), Paul and Christine Heinritz (Fountain Hills, AZ), Mark and Melinda Heinritz (Madison, WI), Cindy and Michael Maxam (Appleton, WI).
And by her Grandchildren: Emily DeWitt; Alan, Carolyn and Philip Canterbury; Athena, Ian, Alasia, Adam Heinritz; Jessica Palm and Jonathan Heinritz; Kareena Tran and Andrea Lewandoski; Hans Heinritz; Nathan Bayer; Sara Allen and Molly Emmons; David, Timothy and Andrew Heinritz; Anne Czajkowski; Richard and Ryan Heinritz; Dr. Meagan McCarthy, Morgan Ireland and Mikaela McCarthy; Dylon and Alexander Heinritz; Sullivan Heinritz; Nicholas and Alexander Maxam.
And by her Great-Grandchildren: Christopher and Vivienne DeWitt; Angelica Canterbury; Cameryn, Claire and Stella Heinritz; Auden Palm, Ethan and Hailey Lewandoski; Oliver and Harper Heinritz; Emily, Madelyn and Alexis Allen; Harper Bayer; Riley Emmons; Joshua, Lucas, and Elijah Heinritz.
Marie was preceded in death by her Husband, Carl Heinritz, her daughter Marie Heinritz, and her son, Thomas Heinritz; and by her grandchildren: Katrina Canterbury, Benjamin and Rachael Bayer; and by her parents, Nicholas and Frances Salm, and her twelve siblings.
A Funeral Liturgy will take place on Thursday, December 15, 2016 at 1:00 p.m. ST. THERESE CATHOLIC CHURCH, 213 E. Wisconsin Avenue in Appleton. Visitation will be held on Thursday starting at 11:00 a.m. until the time of Mass. Interment will be at St. Joseph Cemetery in Appleton. In lieu of flowers, a Memorial Fund will be established by the family members. Online condolences can be offered at www.wichmannfargo.com.