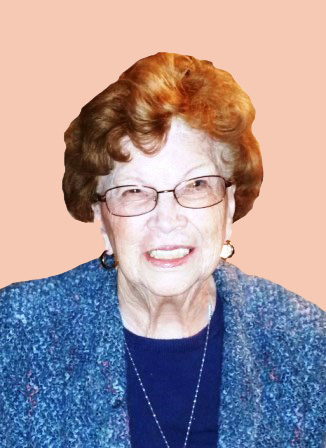 Marian Hooyman of Appleton, WI. died June 10, 2019 at the age of 94. She was born May 8th, 1925 to Peter and Harriet (Vander Velden) Van Heeswyk in Kimberly. At the age of four, after the death of her mother, she and her brother (Cyril) lived with their aunt and uncle, John & Delia (Van Heeswyk) Van Nuland. She married her love, Ray Hooyman, May 10, 1947 at Holy Name Catholic Church in Kimberly. Ray passed away April 23, 2009.

Marian graduated from Kimberly High School and Fox Valley Technical College. She began her career in nursing, but soon changed her profession and attended business school. After a successful business career, she retired from Sears in Appleton as Division Manager. Up until recently, Marian lived independently at Linwood Apartments where she and Ray made many treasured friends.

Marian’s greatest love was her children and grandchildren. She was involved in many of their activities, especially Girl Scouts and as a band mother. Marian always looked forward to her days volunteering at St Vincent, where she made many friends. Marian was active at church as a lector and communion minister where ever they resided, Mesa, AZ, Mountain, Menasha and Appleton, WI. Ray and Marian we members of St. Therese Catholic Church where Marian was involved with various woman’s organizations. She was a member of Catholic Daughters where she held many positions. While in Arizona, she was active in a local Hospice program. Marian was a member of the American Legion Auxiliary of Appleton, where her husband was a former Commander.

A Funeral Liturgy and Celebration of Marian’s life will be officiated at 11 AM on Friday, June 14, 2019 at the Wichmann Funeral Home, 537 N. Superior St. Appleton, WI. Friends and family may visit at the funeral home from 10 AM until the time of service. Inurnment will be in Holy Name Cemetery, Kimberly.