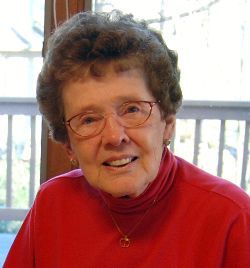 Marian F. Walsh, age 85, of Kaukauna, passed away on Wednesday, November 18, 2015, surrounded by her family. She was born on March 4, 1930, in St. Croix County to the late Joseph F. and Nettie (Meulemans) Aebly. She married the love of her life, Joseph F. Walsh, on June 23, 1956, at St. John's Catholic Church in Glenwood City, Wisconsin.
Marian graduated from Glenwood City High School in 1948 as class salutatorian. From the time she was eight years old, Marian knew she wanted to become a classroom teacher. She taught first grade in public schools for twenty seven years. The bulk of those years were spent in the Kaukauna Area School System. Once retirement came, Marian continued to follow her calling. She taught for five years in the religious education program at St. Aloysius Church, and she took much pride in teaching in the Valley Area Special Needs religion program for 13 years.
Marian was always active in her community, serving as a member of Kaukauna Community Health Associates for twenty seven years. She co-chaired both the first grade hospital tours of Kaukauna Community Hospital and the annual tour of homes. She has been a faithful volunteer at St. Paul Elder Services since 2001, most recently as concierge at the front desk. Marian also found time to serve on both the SPES Outreach Committee and St. Aloysius Parish Council.
In 1999, together with her husband, she established the Walsh Family Fund through the Community Foundation of the Fox Cities. That fund has allowed Marian and Joe to sponsor annual arts performances for thousands of third, fourth, and fifth grade students in Kaukauna schools. They also established the Marian & Joseph Walsh Humanitarian Fund with the St. Elizabeth Community Foundation to serve needy children and their families.
While these activities were rich and satisfying, nothing took precedence over her family. Marian was a devoted wife and strong shoulder to Joe. She was a devoted mother to her daughters, Mary Clare and Ann. Seeing her daughters succeed as students, in their careers, and as mothers and wives has been a continuing joy for Marian and in so many ways reflects her great gifts as a teacher. That love and talent has continued in her days as a grandmother—a great joy of her life.
Marian is survived by Joe, her loving husband of 59 years; her two daughters, Mary Clare (Gregg) Curry of Sherwood, WI and Ann (Mark) Stewart of Woodbury, MN; five grandchildren, Michael (Cassie) Curry, Thomas (Sarah) Curry, Laura (Brian) Bradley, Steven (Hailey) Curry and Mara Stewart (Jeremy Lange).
In addition to her parents she was preceded in death by her sisters Donna and husband Ed Baxter and Dorothy; her brother Ronald Aebly; brothers-in-law Patrick Walsh and Patrick McNamara; and several nieces and nephews.
Marian's first love has always been her family, and second on her list are the many children whose lives she has touched.
A Funeral Liturgy will be held on Friday, November 27, 2015, at 11:00 am at HOLY CROSS CATHOLIC CHURCH, 309 Desnoyer Street, Kaukauna. Visitation will take place on Friday starting at 9:00 am until the time of the service. Interment will be held at Holy Cross Cemetery in Kaukauna. In lieu of flowers, memorials may be made to the Walsh Family Fund at the Community Foundation or the Walsh Humanitarian Fund at St. Elizabeth Hospital in her name. Online condolences may be offered at www.wichmannfargo.com.