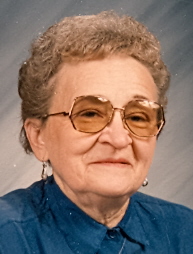 Marian was born on June 3, 1929 to Albert and Anna (Sazma) Weiss and she married Raymond Christenson on June 30, 1951. She worked as a teacher's aide in the Kaukauna School District for 30 years and was one of the original teachers aides when the program was started. Marian enjoyed gardening, sewing, all arts and crafts, but most of all she enjoyed spending time with her family and friends. She also bowled in a couple's league and liked to bowl with her friends from school.

Marian was preceded in death by her parents and her husband Raymond.

The Funeral Liturgy for Marian will be held on Saturday, December 11, 2010 at 12:15 PM at HOLY CROSS CATHOLIC CHURCH (309 Desnoyer St.) with Fr. Tom Pomeroy officiating. Burial will be in the Holy Cross Cemetery. Friends may call on Saturday from 10:00 AM until the time of services at the Church. The family would like to thank Dr. Paul Russo, the staff of Crestwood Home-Sheelin house, the staff of Grand Horizons, Kimberly and Southern Care Hospice for the compassionate care given to Mom through her illness.