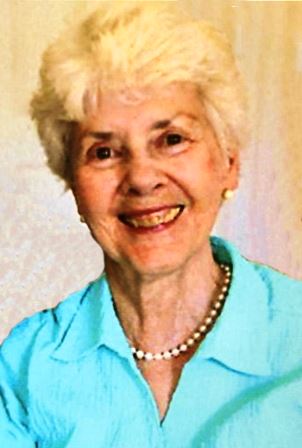 The Funeral Mass may be viewed via Livestream by visiting this site on the day of the mass.

Marian graduated from St. Mary’s High School in Iowa City and from the University of Iowa with a degree in Occupational Therapy. She was commissioned a First Lieutenant in the US Army Women’s Medical Specialist Corps and served two years working with disabled Korean War veterans. Following military service, Marian worked as an Occupational Therapist at the Veterans Administration Hospital in Albany, New York. She and the late Willis (Bill) Anciaux, formerly of Iowa City, were married on August 2, 1957 in Buffalo, New York. They began married life in Argentina where Bill was on a special three-month assignment for General Electric. They returned to Buffalo and began to raise their family. In 1965, they moved to their new home in Appleton where Marian continued to devote herself as a loving, nurturing mother to her growing family, and where she enjoyed and treasured her friends, neighbors, church and community service activities.

Wanting to make special memories with their children, Marian and Bill loaded up their VW bus for several harrowing summer trips “out West” pulling a pop-up camper. Marian’s romantic notions of crossing the plains like early settlers were quickly dispelled in the searing North Dakota heat and by her children’s pleas to take a break from campsites with pit toilets to stay at the next Ramada Inn – with a pool. The trip eventually behind them, they enjoyed the grandeur of many national parks, Yellowstone and Glacier among them, and visits with their extended family.

Marian was an avid reader and later in life tried her hand at creative writing. While participating in a writer’s workshop, she began capturing her recollections of the people and stories most special to her. Her early drafts were well received by Bill and the children, so she decided to expand her writing into a legacy project for the family. About this time, Bill was learning how to scan old photographs on his computer and they decided to include images of the people and places Marian wrote about in her finished work. These memoirs became a treasured gift to the family.

Among her writings is a collection of her mother’s sayings, including “God gave us our memories so we might have roses in December.” Indeed, Marian had a keen memory, one Bill often deferred to in conversations about times gone by. Her gentle, kind and caring nature also endeared her to many friends, family, and even acquaintances. Marian made others feel important and special, simply by listening, and offering a word of encouragement or affirmation. Despite life’s challenges, she managed to keep a positive outlook, reminding others, “It’s always darkest before the dawn.” And during the final years of her life, as her residence changed several times, Marian made a special effort to learn the names of those she met, because she wanted them to know they mattered to her. Truly, the people Marian knew and loved were her most treasured memory, her own roses in December.

A Funeral Liturgy for Marian will be celebrated at 11 AM on Friday, June 25, 2021 at St. Thomas More Catholic Church, 1810 N. McDonald Street, Appleton, with Rev. Jack Mullarkey presiding. Burial will follow at St. Joseph Cemetery, 1815 E Wisconsin Ave., Appleton, WI. Friends and Family may call at the church from 10 AM until the time of the Liturgy, which will be Livestreamed, and may be viewed by visiting wichmannfuneralhomes.com on the service day.

Memorial contributions to the Friends of the Appleton Public Library, St Joseph Food Program, or Pillars (Homeless Shelter) would be appreciated in lieu of flowers.

The Anciaux family would like to extend a special thank you to Dr. Lee Vogel, the staffs of Theda Care at Home Hospice, Peabody Manor, Home Instead, and St. Paul Villa for all of the truly wonderful, compassionate care that they had provided Marian. They are also very thankful to all of Marian’s dear friends, and everyone who called, sent cards or offered prayers and kind words of support during Marian’s illness.

The Funeral Mass may be viewed via Livestream by visiting this site on the day of the mass.