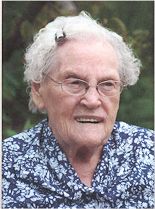 Marguerite A. Johnson, 88, of Prairie Home Assisted Living in Menasha, formerly of Kimberly, passed away peacefully Friday, August 17, 2012, with her family by her side after a courageous battle with Alzheimer's. Marge was born on August 1, 1924, in Greenville, Wisconsin to the late Frank and Della (Van Dyke) Dorn. Marge met her future husband, Don, at her parents' farm in Greenville while he working as a milk tester. Marge and Don were married on November 18, 1944, and they enjoyed nearly 66 years together before his death in September 2010. Marge and Don had a love for traveling, visiting more than 40 of the lower 48 states in their tours. Marge was a life-long stay-at-home Mom, taking great joy in cooking and baking for her family of six children. Crocheting and knitting were a particular favorite pastime of hers. Many afghans, quilts, sweaters, mittens and slippers were generously gifted to family and friends throughout the years.

The family would like to express a special thank-you to all the caring staff at Prairie Home Assisted Living and Heartland Hospice. Your caring, compassion and support during this difficult time have been comforting and greatly appreciated.

A memorial Mass for Marguerite will be held on Thursday, August 23, at 11:00 AM at HOLY SPIRIT PARISH-Kimberly Campus (600 east Kimberly Avenue) with Monsignor Jim Vanden Hogen officiating. Friends may call from 9:00 AM until the time of services at the Church. Online condolences may be expressed at www.wichmannfargo.com.

In lieu of flowers, donations may be made in Marge's name to The Fisher Center for Alzheimer's Research Foundation. http://www.alzinfo.org/