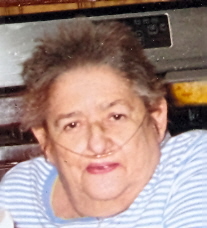 Age 71, passed away on Saturday morning, February 7, 2009 at her home. She was born on September 25, 1937 in New London, daughter of the late Irvin and Margarete (Spencer) Suprise. On May 22, 1957 she married Kirby Vanden Bloomer, and the couple celebrated 51 wonderful years this past May. Margarette enjoyed working in the garden with her kids, and her sister-in-law Bonita Vanden Bloomer; fishing and ice fishing; playing the spoons at the Schuler Shack; and watching Packer games.

Funeral services for Margarette will be held at 11:00 A.M. on Wednesday, February 11, 2009 at Holy Cross Church (309 Desnoyer Street) with Father Tom Pomeroy officiating. Friends will be received at the church from 8:00 A.M. until the time of Mass. Interment will be in Holy Cross Cemetery, Kaukauna. In lieu of flowers, a memorial fund is being established.

The family wished to thank the pulmonary team at A.M.C. especially Dr. Whiteside and Dr. Eric, as well as Mom's nurse, Paul Halbach, for their loving care and compassion.