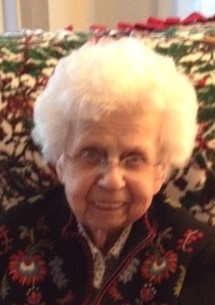 Margaret Mary Van Himbergen, 95 of Kimberly, passed away unexpectedly on June 19, 2015 at Appleton Medical Center. Margaret was born on June 1, 1920 to William and Lena (Green) Conrad. On November 26, 1945 she married Cyril John “Jack” Van Himbergen. They enjoyed over 42 years of marriage until Jack preceded her in death on October 13, 1987. Family was very important to Margaret. In her younger days, she helped to run her brother's grocery store when he went off to war. When she started a family of her own, she and Jack always worked as a team, raising the children and working to provide for the family. She especially enjoyed working with Jack to help run Jack's Frozen Custard in Kimberly. She was active with the Brownies and served as a Brownie Leader when her girls were young. She was a former member and past president of The Kimberly Homemakers. For many years, Margaret was part of an informal group of friends and neighbors called the “The Club”. More recently, she enjoyed reading, doing word searches and jigsaw puzzles.

Friends may call at St. Paul Catholic Church, 410 E. Wallace Street in Combined Locks on Tuesday, June 23, 2015 from 2:00 pm to 4:00 pm. Mass of Christian Burial to follow immediately at the church at 4:00 pm with Fr. Andrew Kysely officiating.

The family would like to thank the Fox Valley Metro responding EMTs and police officers. Also thank you to the staff and nurses of Appleton Medical Center, ER and 8th floor, as well as ThedaCare at Home Hospice. A special thank you to Margaret's close friends who always helped her so much, Hazel Christopher, Mary Nackers, Kim VandenHeuvel and Kelly Sells.